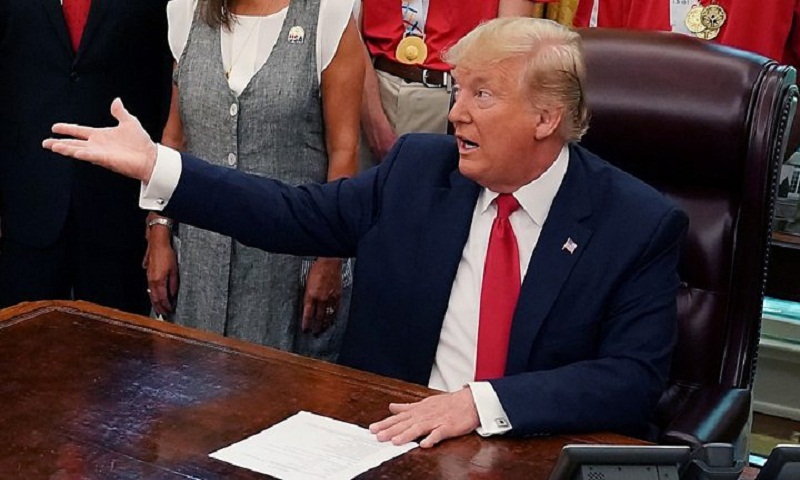 Donald Trump, watching a schism form between the Democratic Party leadership and a restive group of progressives new to Congress, decided to light a match and then dance around the flames.

He tweeted on Sunday that a group of progressive critics in Congress - three of whom were born in the US - should go back to their home countries, then stood silent on Wednesday night as a rally crowd chanted for the one who wasn't to be deported.

Like the calls for Hillary Clinton to be imprisoned three years ago, the "send her back" chant is not emblematic of a healthy, well-functioning democracy. It has been roundly condemned. And yet it is a storm entirely of Mr Trump's making.

The president, it should be clear at this point, is an instinctual politician. There is a risk to ascribing grand strategy behind his actions. In most cases, the action comes first, and the strategy follows. There are, however, some hints to be gleaned from the week's race conflagration about what lies ahead.

In all likelihood, Mr Trump has a narrow path to re-election. Despite a strong economy, his overall approval rating has hovered in the low to mid-40s for most of his presidency, and there is a significant portion of the electorate that has told pollsters they will not vote for him under any circumstances.

Traditionally, incumbent presidents have tried to expand their electoral appeal while in office. That hasn't been Mr Trump's plan. His 2020 goal is to hold on to what he won in 2016, largely by ensuring that his most dedicated supporters once again show up at the polls.

The 2018 mid-term elections provide a useful insight into how that does, and doesn't work. In much of the country, turnout from Trump supporters was down, Republican candidates suffered and the party lost control of the House of Representatives.

In Florida, on the other hand, the mid-terms turned out differently and the state could provide a playbook for next year's election. The president's base once again showed up- and conservative candidates unseated a Democratic senator and won the governor's contest. Florida was the Republican bulwark in what otherwise was a wave election for the opposition.

So the president, in his tweets and follow-up comments, is throwing red meat to the core of his party, which polls indicate view immigrants and immigration with suspicion and approve of the president's recent tweets.

There have always been accusations of racism chasing the president's politics, ever since his embrace of conspiracies around Barack Obama's birth certificate, and the continued with his call for a Muslim immigration ban, his dismissal of a US-born judge who ruled against him as being "Mexican" and his comment that there were some "very fine people" among the torch-bearing white nationalists in Charlottesville. And despite all this, or perhaps because of it, members of the Republican Party have supported the president in near record numbers.

The fact that the four women the president has chosen to single out for criticism are minorities, then, should come as no surprise.

There is the risk that this move will backfire, of course. It could alienate the elusive swing voters or end up motivating his opponents as much or more than it does his base. And it virtually ensures that the nation will remain as hopelessly divided - perhaps ungovernably so - for the foreseeable future.

It is, however, his best shot at winning four more years in office.

Demean and divide the Democrats

Part of the reason Mr Trump won the presidency in 2016 was because enough voters, particularly in key mid-western swing states, viewed him as the least bad choice. As Washington Post reporter Dave Weigel points out, of the 20% of voters in Michigan who disliked both candidates, 21% more backed Mr Trump over Democrat Hillary Clinton.

There's no Democratic nominee yet for Mr Trump to go after - that will come later. In the meantime, however, he is picking targets of opportunity, including Ilhan Omar, Alexandria Ocasio-Cortez and the other outspoken minority women in "the squad". It's a preview of exactly how nasty things are going to get.

While national attention understandably focused on the racist connotations of his "go back … to the crime infested places from which they came" tweets, the point of his attack was to sow division between these women and Speaker of the House Nancy Pelosi. His follow up tweets cited their past criticisms of the US government policies and attempted to paint their "radical" or "socialist" policies as a threat to American peace and prosperity.

On multiple occasions, the president explicitly said that the squad was now wedded to the Democratic Party, and it would cost them in the 2020 elections.

When trying to determine the president's plan, reading between the lines sometimes isn't necessary. He just comes right out and says what he's trying to do.

Perhaps the simplest way to understand the president's incendiary tweets, and his decision to fully embrace them amidst the resulting conflagration, is to view the chaos and the outrage as the point, not the by-product.

During last week's "social media summit" at the White House, Mr Trump said he paid careful attention to how his social media posts perform and boasted about the retweets he received when he wrote that Mr Obama had his "wires tapped in Trump Tower" - a line that at the time generated an inordinate amount of criticism and hand-wringing.

Ever since he launched his presidential campaign in 2015, Mr Trump has been a perpetual motion machine of controversy. He instigates it; he welcomes it. And, by the way, he has reached the highest pinnacle of power in US politics.

While correlation doesn't imply causation, it may be easy for the president - who one must remember has only run one political campaign in his entire life - to infer that, in this case, it does.