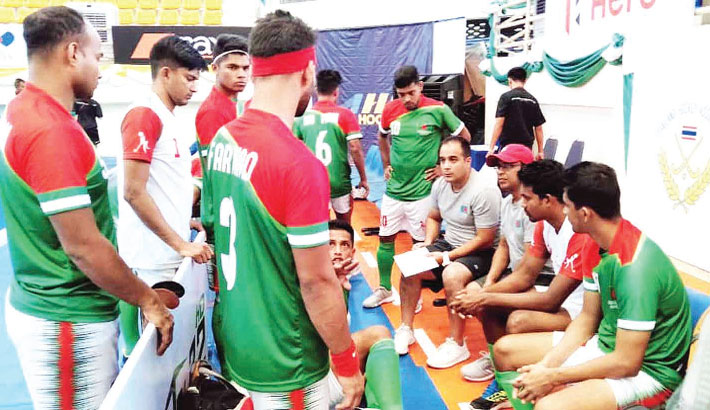 Bangladesh National Hockey Team players participate in a team meeting during the break of their Asian Indoor Hockey match against Philippines on Tuesday. Bangladesh won 9-0.

Bangladesh National Hockey team clinched their maiden win in AHF Men’s Asian Indoor Hockey 2019 beating Philippines by 9-0 goals in their third Pool A match at Chonburi of Thailand on Wednesday.

After conceding two successive defeats, Bangladesh have secured 3 points from their three matches of the tournament.

In the goal fest match, Bangladesh put pressure on Philippines team within the opening minute and bagged its fruits while Mainul Islam Koushik scored two goals in a span of just one minute (4th and 5th minutes) (2-0).

In the 9th minute, Ashraful Islam widened the margin scoring third goal for his side from Penalty Corner (3-0).

Koushik struck again and made his hat-trick scoring his third goal in the 11th minute (4-0).

Before the first half, Bangladesh netted two more goals against Philippines.

Rasel Mahmud Jimi opened his account in the 17th minute (5-0) while Koushik netted his fourth goal in the 20th minute (6-0).

In the second half, Bangladesh continued their domination with their attacking brand of hockey.

In the 36th minute, Koushik completed his double hat-trick scoring his sixth goal of the match and sealed the first-ever victory for Bangladesh in Asian Indoor Hockey meet (9-0).

The match saw three Bangladeshi players getting green cards and one yellow card.

In their last Pool A match, Bangladesh will face upper-ranked team and hosts Thailand on Thursday (July 18) at the same venue at 8 pm (BdST).