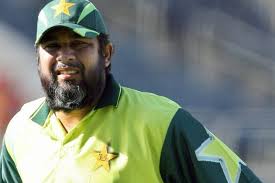 Pakistan cricket's chief selector Inzamam-ul-Haq says he will not stay in the job after his contract ends July 31.

The Pakistan Cricket Board may not have renewed Inzamam's contract, anyway, after Pakistan failed to advance to the semifinals at the Cricket World Cup. It finished with the same number of points — 11 — as fourth-place New Zealand but the Black Caps qualified on superior net run-rate and lost to England in Sunday's final.

"After more than three years as chairman (of the selection committee), I have decided not to seek a renewal of my contract," Inzamam said.

The former Pakistan test captain said he wanted the next chief selector to have enough time to prepare the team for the next Cricket World Cup in 2023 in India.

Inzamam was appointed chief selector in 2016 and during his tenure Pakistan won the Champions Trophy in England in 2017 — beating India by 180 runs — and have been on top of the Twenty20 rankings since Jan. 2018.

Inzamam met with Pakistan Cricket Board chairman Ehsan Mani and managing director Wasim Khan on Monday and told them his decision not to extend his contract.

Since the retirement of batsmen Misbah-ul-Haq and Younis Khan in 2017, a number of players have made their international debuts, including opening batsman Fakhar Zaman, leg-spinner Shadab Khan and fast bowlers Hasan Ali and Shaheen Afridi, during Inzamam's tenure as chief selector.

However, Inzamam faced criticism when he selected his nephew — left-handed opening batsman Imam-ul-Haq — in 2017.

But Inzamam defended his selection, saying his nephew deserved respect like any other Pakistan player.

"Imam was first picked for Pakistan's under-19 team in 2012 when I was not the chief selector," he said.

"He was again picked as the vice-captain of the Under-19 team which played the World Cup in 2014.

"So he came through the system and nothing else. He should be given respect like we give to any other Pakistan player."

Inzamam also defended Pakistan's performance in the recent World Cup despite starting off badly against the West Indies — when Pakistan was all out for 105 — and also losing to archrival India and Australia.

"We knew we needed to improve our net run-rate drastically," he said.

"But the wickets got difficult as the tournament progressed and it's evident from the fact that England found it difficult to chase down even 241 runs in the final," he said.

Inzamam said he never dropped a player for personal reasons during his three-year tenure as chief selector, but "I am also a human being and can make mistakes."

"The team could have performed better during my time than the results reflect," he said.

"I may have inadvertently overlooked some potentially deserving players, but I have always had the best interests of Pakistan cricket foremost in my heart.

"I hope the passionate Pakistan cricket fans will understand and can see this in my decisions."