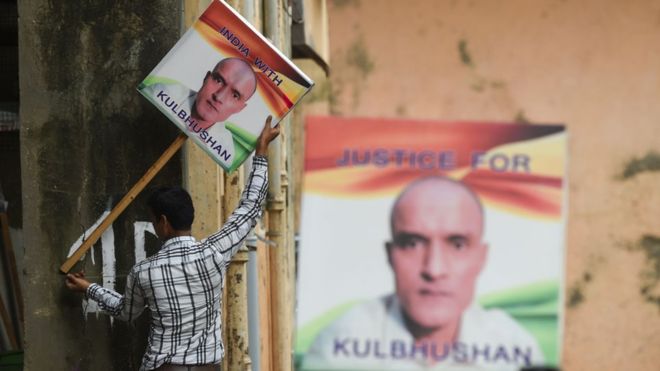 An international court has ordered Pakistan to review the death penalty given to a retired Indian Navy officer.

India denies Kulbhushan Jadhav is a spy. It has argued in the International Court of Justice (ICJ) that Pakistan has violated international law by forbidding consular access to him.

The rulings of the ICJ are binding but it has no power to enforce them.

Kulbhushan Jadhav was arrested in Pakistan in March 2016, and sentenced to death the following year.

Pakistan, the court ruled, had failed to inform Mr Jadhav of his rights, and "deprived the Republic of India of the right to communicate with and have access to [him], to visit him in detention and to arrange for his legal representation".

"A continued stay of execution constitutes an indispensible condition for the effective review and reconsideration of the conviction and sentence of Mr Kulbhushan Sudhir Jadhav," it added.

An Indian government told AFP the ruling was "a complete victory", adding: "This opens up the possibility of consular access and a retrial in a civilian court."

Wednesday's verdict is likely to fuel tensions between the nuclear powers.

India and Pakistan were on the brink of war in February over the disputed territory of Kashmir.

The neighbours have a long history of diplomatic spats and Delhi and Islamabad often accuse each other of sending spies into their territories.

The case of Kulbhushan Jadhav has been a thorny issue since his arrest three years ago.

Pakistan said it had detained him in the restive province of Balochistan, home to a separatist insurgency that it accuses India of backing. India said he was kidnapped in Iran, which borders the province, where he was doing business.

Shortly after his arrest, the Pakistani authorities released a video in which he was shown admitting involvement in spying.

India has always questioned the alleged confession, saying that it was extracted under duress.

In April 2017, Pakistan said he had been convicted in a military court of espionage and terrorism and sentenced to death. India then filed a case with the ICJ, which ordered Pakistan not to execute him until the case was heard and a decision reached.