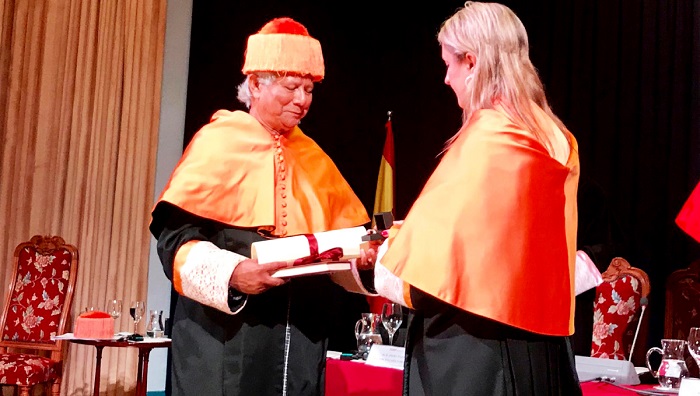 Nobel Laureate Professor Dr Muhammad Yunus has been given an honorary doctorate (Doctor Honoris Causa) at the University of Cantabria, Santander, Spain.

The ceremony was recently held at the Summer Palace of the King of Spain which had been converted into Cantabria University in 1936, said the Yunus Centre on Sunday.

In his acceptance speech, Prof Yunus drew the attention of the audience made of leading citizens of the city, professors and students of the university that university is the contact point between the young generation and all the accumulated knowledge of the previous generations.

“We must not forget that university is the place where wrong theories and ideas are shattered into pieces to redesign new theories and new ideas,” he said.

The university authorities gave copies of Spanish edition of Prof Yunus’ book “A World of Three Zeros” to the participants to have a better understanding of his philosophy and actions.

During his visit to Santander on the coast of Atlantic Ocean, two universities made formal announcement of creating Yunus Social Business Centres (YSBC) and signed agreements with Yunus Centre in Dhaka.

These universities are Cantabria University and Murcia University, both in Santander. They joined the network of already existing 76 Yunus Social Business Centres (YSBC) in 31 countries.

From Santander, Prof Yunus proceeded to Madrid, where he was given a reception with the Mayor of Madrid, José Luis Martínez Almeida along with a group of leading professionals, industrialists and social activists.

Representatives from public and private sectors were present at the reception.

During the reception, the participants exchanged views on impending danger of global warming, youth unemployment, rise of popularism, future of social business, future of present version of capitalism, role of businesses in society.