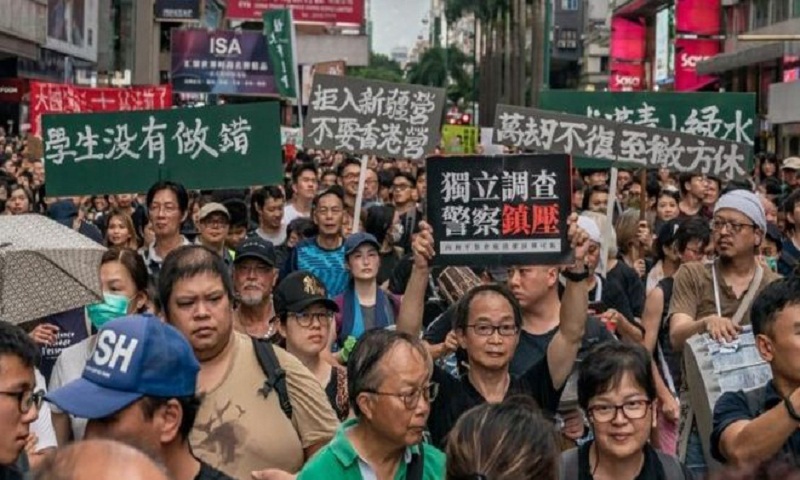 The leader of Hong Kong, Carrie Lam, said this week that a controversial extradition bill was "dead".

The comments provided much relief for businesses concerned about the fall-out from proposed changes to allow for extraditions to mainland China.

They had worried these changes would hurt the very autonomy that has made Hong Kong into one of Asia's most important financial hubs.

But protesters remain unconvinced and want to see the extradition bill formally withdrawn.

A stand-off between the government and protestors is thus likely to continue, posing a fresh risk to Hong Kong's international reputation as an attractive place to do business.

"There's an eerie sense that the government and protesters have a large space between them," Tara Joseph, president of the American Chamber of Commerce in Hong Kong, told me.

"The local economy is feeling the pinch of the US-China trade war - protests are an extra layer. It's really important that there's some conclusion to this."

Indeed, there are already signs that people are getting nervous in Asia's oldest financial hub.

Anecdotal evidence shows that the wealthy in Hong Kong are already considering their options.

"I've definitely seen a spike in inquiries from high-net-worth individuals in Hong Kong looking to secure residency rights or citizenship elsewhere in the world," David Lesperance, an immigration lawyer, told me.

Mr Lesperance says those high-net-worth individuals in Hong Kong had been worried for some time.

But the recent controversy surrounding the extradition bill, and the subsequent protests and storming of the legislative council, have really prompted action, he said.

"People will be strengthening up their back-up plans with the acquisition of citizenships, either by investment or naturalisation," Mr Lesperance says.

"I can confirm this is definitely happening."

Private banking clients are also making inquiries about moving accounts to Singapore and some private bankers told me a record number are already doing so.

Others, however, say only a small percentage of their clients are worried.

Some in the business community say the risk premium of operating in Hong Kong has also already gone up.

Some companies are reportedly actively exploring moving their headquarters elsewhere, they say, although there is no official evidence of that yet.

Given that the bill is just "dead" and has not yet been formally withdrawn, experts expect protests to continue.

Marches are already being planned for the coming weeks and protesters say they will not stop until all their demands are met.

But lawyers are confident the controversial extradition bill will never see the light of day.

"It seems to be about saving face for Carrie Lam and avoiding being seen to give in to protesters' demands. That's why she didn't use the word 'withdraw'," says Antony Dapiran, a Hong Kong-based lawyer and author of the book City of Protest.

"There's no secret plan to reintroduce the bill. Not least because the pro-Beijing political parties who technically need to pass it in parliament are extremely annoyed by what's happened. There's no political will to push this through."

Still, the street protests are expected to continue and these are already having an impact on business in the city.

"Tourism is down 5-10% so far [since the protests began]," Allan Zeman, a Hong Kong businessman and founder of Hong Kong's popular nightlife district Lan Kwai Fong, told me.

"Retail is down, many of the retail shops where protesters have been had to close down. Business is destabilised."

But the long-term fall-out could be limited.

"We had Occupy Central for 79 days in Hong Kong and this city recovered and bounced back," he told me.

"What this is really about is social problems - housing and how to bring prices down. If your life is good, then you will love the government and China. If your rent is high, you will go to the streets."

Hong Kong's economic survival depends on it being independent and autonomous from China - a predicament Mr Zeman says China is well aware of and would not be willing to risk.

But many in the business community have told me that its relevance and economic future also hinges on it being the gateway to the mainland - a tricky balance to strike particularly for a population increasingly concerned about freedom.

"I have to grow old here, raise my kids here. And China's influence is becoming stronger all the time," Naomi Ho, a 25 year old activist, told me. "2047 is just around the corner. If we do nothing now, Hong Kong might as well be another city in China."

That's the year when Hong Kong's Basic Law ends, and what happens to the territory's special status under the "one country, two systems" principle is unclear.

Under the Basic Law, which has been in place since the UK handed Hong Kong back to China in 1997, Hong Kongers are guaranteed a level of autonomy and freedoms that mainland Chinese don't have. An independent judiciary, for instance, and the right to protest are among them.

In a report in 2018, the European Commission said Hong Kong's "one country, two systems" principle was the cornerstone of the territory's economic success and that it had "legitimate concerns about whether Hong Kong's high degree of autonomy and its attractiveness as an international business centre will continue to be upheld in the long term".

One of the glaring realities this current political impasse has brought home is just how close 2047 is.

For many of the young people protesting out in the streets that I met in Hong Kong though, the threat of China's increasing influence is just too great a risk to ignore.

And therein lies Hong Kong's conundrum. It needs to balance China's economic presence with the demands and desires of its youth - who see no economic future in accepting more control from Beijing.