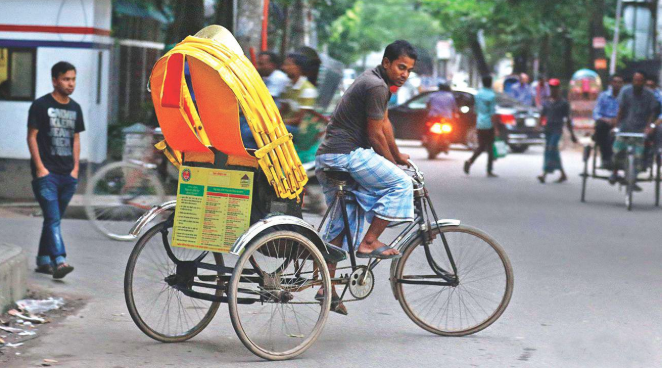 It is a long-standing demand for banning rickshaws from important highways, but hardly any detailed plan has been worked out to integrate them into the city's vehicle fleet. Prime Minister Sheikh Hasina has conscientiously instructed that separate lanes must be there for slow-moving vehicles on highways.

Though it seems the premier's instruction is based on sympathy towards the protesting drivers of the three-wheelers, but, in fact, there is no viable alternative other than this at this moment to bring discipline on the roads.

The city authorities banned rickshaws from some main thoroughfares in the city since July 7. This triggered stiff resistance on the part of the operators and drivers of the slow-moving, but essential vehicles. Needless to mention, almost all of them are engaged in this hard-working job as they have no other means for bringing up their families. The restriction on their movement will drastically reduce their daily earning.

We know that it is a constant eyesore that rickshaws, motorcycles, buses and private cars use the same narrow roads in the city almost without maintaining any discipline. At times rickshaws compete with buses and other vehicles. This creates traffic chaos that has become synonymous with capital Dhaka.

None can deny that rickshaws and other slow-moving vehicles compel the faster ones to move slower. This is a common reason why all the thoroughfares in the city are clogged, especially during pick hours.

But, the drawback of having the slow-moving vehicles on highways cannot be removed overnight by imposing a wholesale ban on the three-wheelers. In fact, the number of illegal rickshaws is overwhelmingly high than the legal ones and this is the main reasons why we see innumerable three-wheelers on roads, including on the important highways.

Banning of illegal rickshaws can be effective by limiting their numbers significantly. The demarcation of separate lanes for rickshaws and strictly ensuring their movement along the lanes is a pragmatic strategy to maintain discipline on roads by keeping the three-wheelers in operation.