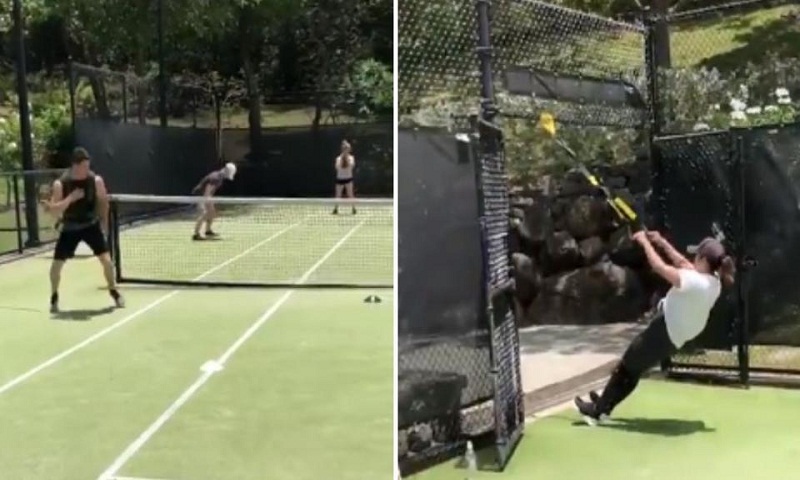 Actor Priyanka Chopra and her American singer Nick Jonas’ videos and pictures from their travels across the world are a huge hit with their fans. However, behind all the glamour is a lot of hard work, as the new video clip shows. Nick shared a video as his Instagram story, which shows both the stars sweating it out at the songwriting camp of his band.

Sharing the videos, Nick simply wrote: “Songwriting camp group workout.” In the video, Nick along with other members of his music group is seen at a tennis court, doing various bending and stretching exercises. As the camera pans, at the far end of the court Priyanka can be seen doing a rope exercise. Priyanka’s back is to the camera; she is wearing a pair of black leggings with a white T-shirt and has a cap on.

Nick and Priyanka took a long break -- first in France for the second wedding of Games of Thrones star Sophie Turner to American singer Joe Jonas followed by a vacation in Italy. On Sunday, she shared a string of photographs of her posing by the poolside in a white monokini paired with sunglasses with a cocktail in her hand.

“Best use of vacation. The hubby taking pictures. Lol. Nick Jonas,” she captioned the images on Instagram. Nick posted a video of himself along with Priyanka enjoying the sunset in Tuscany.

While Nick will get busy with Jonas Brothers’ tour, Priyanka has completed her work on her next film, The Sky Is Pink, where her co-stars include actors Farhan Akhtar and Zaira Wasim. The film has been directed by Shonali Bose, reports The Indian Express.