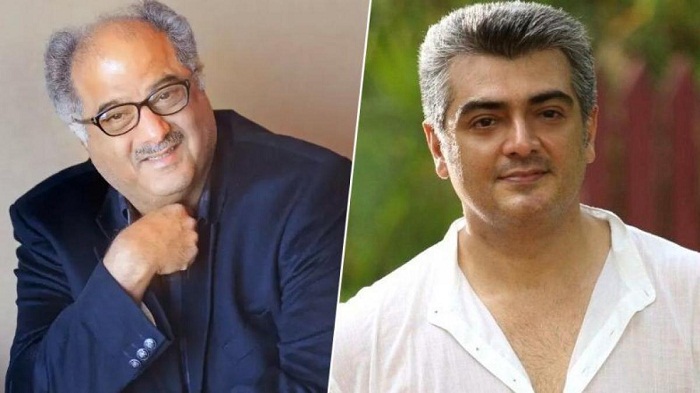 Tamil star Ajith Kumar and Bollywood filmmaker Boney Kapoor, who are collaborating on the Tamil remake of Amitabh Bachchan, Taapsee Pannu starrer Pink called Nerkonda Paarvai, are said to have signed another project. This will be their third project after Pink remake and another untitled project. If the industry grapevine is anything to go by, Ajith has been paid Rs 100 crore for the three-film deal, reports Hindustan Times.

Details about the third film are yet not known. However, recent reports indicate that it could be a high-octane action script which will shot across exotic locations around the globe. There were already reports that Ajith might be seen playing a racer in his next film.

Meanwhile, Nerkonda Paarvai is gearing up for release on August 10. The film, which has been directed by H Vinoth, features Ajith in the role of a lawyer. The film, which marks the Tamil debut of Vidya Balan in a crucial role, also stars Shraddha Srinath, Andrea Tariang and Abhirami Venkatachalam.

The project was materialized to honour’s Ajith’s promise to Sridevi. It was late Sridevi’s wish that her husband produces a film with Ajith, who had shared screen space with the veteran in English Vinglish in a cameo.

In a recent interview, director Vinoth opened up on the project and why he was hesitant to take up a remake so early on in his career. “I know about Ajith sir fans. I have had a tough journey to build a career, and a mistake could spell disaster. I realised that there could be two issues — how his fans would consume this film and how a cult film that has admirers across the country could be remade by retaining the essence. We should first at least understand half of Pink. The challenge was also to find the right cast and crew. I told Ajith sir these issues and that I was afraid to do this film. He told me that he would not pressurize me and told me to concentrate on another script.”