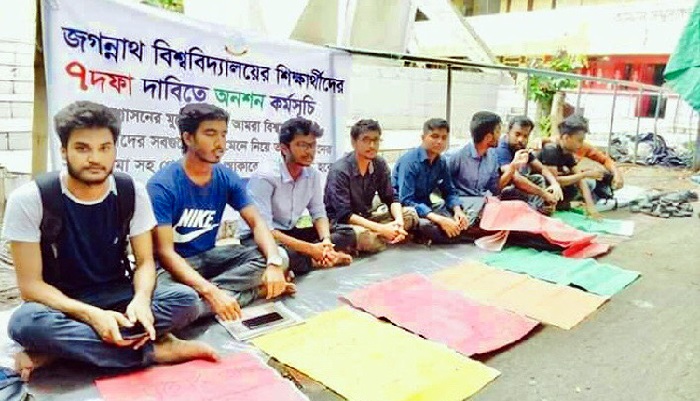 A group of JnU protesters on Sunday started hunger strike unto death to press their 7-point demands including central students’ union elections in front of the Central Shaheed Minar on the campus.

Convener of the movement Raisul Islam Nayon said, “We are observing hunger strike. None from the university administration has communicated with us yet.”

He also claimed that the university authorities always give us promises to materialise their demands. But their promises go in vain.

“If assurance of the implementation of our demands is published through a press release, only then we will postpone our movement,” Raisul added.

Earlier, on July 5, they staged demonstration and besieged the office of the vice-chancellor to press their demand of holding Jagannath University Central Students Union elections within 4 months.

-Ensuring better food quality in canteen at a cheaper rate

-Appointing 70 per cent teachers from the university students and

-Accelerating the process of setting up the second JnU campus.