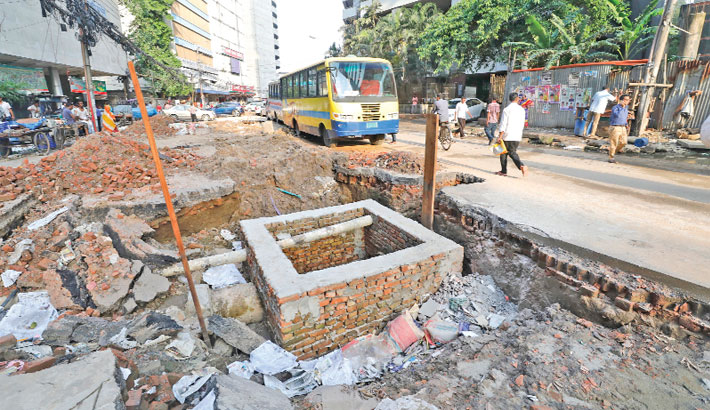 A busy road at Dilkusha in the capital’s Motijheel area is being dug to install sewerage line, hampering traffic. Road digging work in rainy season causes immense sufferings for commuters and pedestrians in the city. The photo was taken on Tuesday. – sun Photo

Dhaka city residents are suffering  every day due to the unplanned digging and renovation work of roads, sewerage lines, median and walkway the rainy season.

Renovation work makes many roads unusable in the overpopulated city during the rains.

In some parts of the city, construction work of roads and other utilities go on slowly, causing sufferings for the people. Nobody knows when and how the road digging will end as utility providers don’t pay attention to public sufferings, many affected people alleged.

If an agency starts digging a road, immediately another one fills it to be dug by another, which leaves the road uncomfortable for years.

Most of the dug roads are not repaired after the completion of the work and the dug-up roads remain in such a shabby condition for months.

Commuters and passers-by face severe inconvenience as utility service-providers are digging up roads, lanes and by lanes simultaneously.

Many roads in two City Corporations have been dug up for developmental works. Road repair, setting up sewerage line, median and walkway construction are on triggering immense sufferings during rainy season.

Especially the woes of women, physically challenged and sick people beg word to describe. Although regulations discourage digging during rainy season, utility service-providers are showing sheer negligence to it.

During a visit to Malibagh Bazar Road, the correspondent found that the road was dug up to install storm sewer there. Around 1.25 kilometres road stretching from Malibagh Kitchen Market to Shahi Masjid was dug out.

Locals alleged that the road was dug out more than three months ago for the construction works.

As there was no alternative way, several hundred residents in the area were forced to pass through the almost unusable road as loosened earth, dusty or muddy, bricks were heaped in piles or remaining littered messily in the area along with stagnant rain water and sewage in the dugout holes.

Nurul Islam Bhuiyan, a resident of Malibagh area, said this is an important road. Thousands of vehicles of different routes travel by this road every day. The road has been closed for long to repair drainage.

“Everyday people move through the road at a risk of life. None knows how long it will take to finish the job” he added. Golam Ashraf Talukder, ward-12 councillor of Dhaka South City Corporation, said this work has started at a time when there is no such rule to do.

There is a prohibition of doing such work in the monsoon season.

“The problem intensified due to rains. But, I have asked the construction company to remove soil during dry weather,” he added.

Setting up sewerage line is underway from Shahjahanpur intersection to Government Colony. Around 1 kilometre road stretching was dug out. That’s why a deep hole was created on the road. The clay soil has been stacked in a part of the road.

Traffic was suspended on the road for the construction work. But no signboard was put in anywhere about the road closer. So, a huge number of private cars, rickshaws and other vehicles come to the road and get back.

Many had been questioning the ongoing repair work as it should not be conducted during the rainy season.

Harunur Rashid, executive engineer of the DSCC zone-2, said no doubt that the people are suffering. Rains hamper the work.

He said the construction work was jointly going on at some points in Malibagh-Khilgaon-Shahjahanpur areas under a package project with one-year validity to improve the drainage system.

However, the work in this area will be completed within two months, he added.

Besides, development work of DSCC and WASA are going on in many places around Motijheel. For this reason, a large pipe has been left on the street somewhere.

The road was cut off somewhere. Because of that, the road is becoming narrower, intensifying traffic jam every day.