Rifat’s Murder and Our Liability 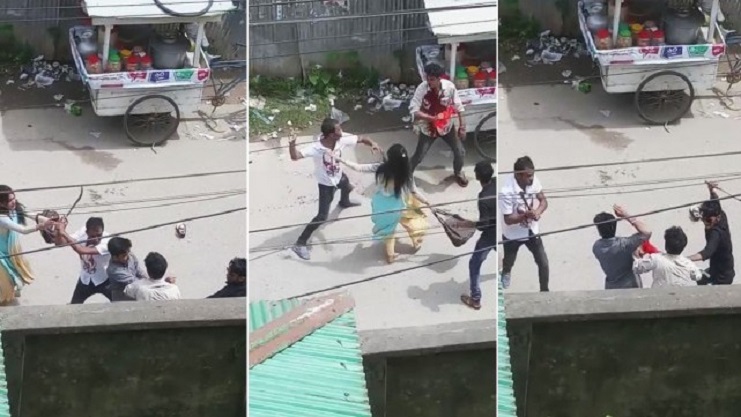 I was taken aback watching a video on social media that portrays an incident of killing of Rifat in front of his wife near Barguna Government College by a group of assailants in the presence of hundreds of people. It is really throbbing to think that a husband had to accept death in his endeavour to protect her wife from the fracas of the eve teasers. It is really a pity to think that this sort of merciless event is taking place in our society every now and then. Such an incident has put us in such a situation where we are forced to start to think that whether we wanted such a Bangladesh that became independent due to the sacrifice of the lives of three million Bangladeshis. The most perturbing fact is that the intensity of such incident is on the upsurge over the period of time despite the government’s efforts to streamline different legal frameworks as regards to violence against women and eve teasing.

Such an incident is a reflection of the dilapidation of societal values. I strongly believe that along with the government all societal actors should have to accept the responsibility of such degradation. The prolonged judicial process is in a way encouraging the reprobates to take part in such incident time and again as the final decision on any such incident from the court comes after many years. Moreover, the miscreants get an opportunity to file an appeal in different higher courts that also takes a long time. In this process, the family members of the victims become unenthusiastic to carry forward the process that also necessitates them to spend a lot of money. Unfortunately, many of the family members do not have the ability to spend the money. Another aspect is the difficulty in finding bystanders of the incidents of rape, eve-teasing and killings. Of course, there are instances that killings took place in the presence of hundreds of people as like as the recent incident of Rifat but the people beholding the incident do not show keenness to act as a bystander. Thus, in the absence of the eyewitnesses, the offenders manage to get freed that in a way encourage them to get involved in such activity again.

It creates burning in my heart when I observe that Rifat was killed in front of many people. Many of the eyewitnesses could manage to shoot a video and took photos of the incident. But, none of them was ready to come forward to stop the reprobates from killing an innocent husband. Had a number of people came forward and resisted them; they could have easily saved his life. This is happening due to the dilapidation of social values and egocentric attitude of the people living in society. We are making development in different sectors and living in a mechanised and digital world, but we have failed to become human beings. Most grippingly, all incidents associated with the violence against women, eve teasing and killings are getting published in social media that are playing an important role in making a social movement. Regrettably, we find very few people who are coming forward to protest.

Of course, there are some valid reasons for these people to remain inaudible as these scoundrels are very powerful with political support. Manipulating the power of politics they could manage to gain the support of the corrupt police officers who are the main actors responsible for bringing them in the court of law. In the case of Nusrat's murder, we have seen that the corrupt police officials came out as one of the important actors that deprived Nusrat of getting justice and helped the criminals to kill her. The situation is almost the same all over the country.

On the other hand, the political leaders in most cases try to help these criminals by influencing the law enforcing agencies. Thus, the general people feel droopy to raise their voice against such an incident with the fear that they would be the victims of such incident if they get involved in any movement. One important fact is that the video clip that became viral on social media will help the law enforcing agencies to identify the assailants. In the meantime, the officer-in-charge of Barguna Police Station has confirmed that they have identified at least three assailants from the video. Thus, the whole nation is expecting that the assailants will be brought under the trial within the shortest possible time.

Under the above circumstance, the only solution to such a problem is the execution of these reprobates in board daylight in front of thousands of the population within the shortest possible time. The government, of course, has brought changes in the legal frameworks that deal with the issue of rape, eve-teasing and violence against women. But, the existence of a legal framework within the regular courts of law is not enough to create a sense of fear among these people. Thus, they are required to be executed through a fast tribunal and executed in front of the people. This will send a message to others who would feel discouraged to get involved in such an incident. Of course, the human rights organisations and activists may criticise my proposition. But, at the same time, I am also critical about the human rights organisations that always stand behind these troublemakers in the name of human rights. But, my question to them is whether they have considered the rights of the husband who was killed brutally in front of his wife who will have to carry this pain throughout her life. What the parents will do in the rest of their life losing the only son at such an early age? Will these organisations show their sympathy and stand behind this family to press their demands on the government to find these miscreants and bring him under the speedy trial.

The process of change in the societal values needs to be hastened through ensuring the participation of the government and all other societal actors in this process. On the part of the government, they should come up with a holistic reform package. First, the government could consider integrating the negative sides of issues and possible punishment within the curriculum of the primary school. If it is done, a person from his childhood would start learning that what he/she should do and do not. Second, the government should also ponder bringing changes in the legal system so that these issues could be dealt with in a speedy tribunal before the people forget the memory of the brutality. Third, the government should warn their lawmakers and party men as well as the law enforcing agencies to remain active in ensuring the punishment of the miscreants. On the other hand, the people in the society should teach their kids from their childhood about the negative aspects of pestering of women and eve teasing. Moreover, the people in the society need to come forward to protest any sort of delinquency on the roads collectively instead of shooting videos and taking photos. Only, then, we will be able to fight against this disease of the society and save our women from further harassments and no husband will be forced to accept death in his effort to save his wife.