Once a strongman, Ershad now shuttling between home and hospital 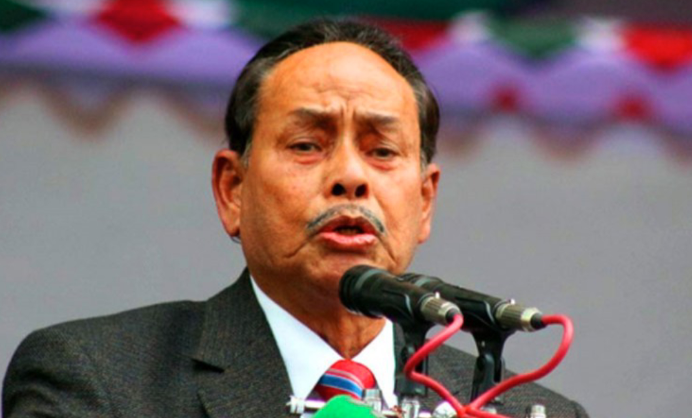 An iron man who had ruled the country for nine years before getting ousted amid a strong movement at the end of 1990, Jatiya Party chairman HM Ershad is now counting his final days shuttling between home and hospital with his fast falling health.

The 89-year-old army-officer–turned politician became inactive in politics and was hardly seen at any programme since mid-November last.

Apart from poor health condition, party insiders said Ershad is also suffering from mental agony due to family feud over distribution of his assets, nomination of a party successor and inattention by some of his party senior leaders.

Ershad received treatment aboard and at Combined Military Hospital (CMH) here at different times over the last eight months.

Taking to UNB, Ershad’s press secretary Shunil Shuvo Roy said the Jatiya Party chief got affected by fever on Tuesday night and was taken to the CMH here on Wednesday morning as his condition deteriorated.

He said Ershad was admitted to the same hospital earlier on June 22. “Our chairman now often needs to visit the CMH as his condition is unstable.”

“Doctors said his condition improved 40 percent in the last two days. They, however, said they still didn’t receive some of his medical test reports.”

Asked whether there is any possibility to send Ershad abroad for better treatment, Quader said they are still not thinking about it.

“My brother told me that he has confidence in the treatment of the CMH doctors, and he’s willing to receive treatment there,” he said.

Jatiya Party secretary general Moshiur Rahman Ranga said their ailing chairman’s condition is not stable enough to send him abroad for better treatment. “If his condition improves, we’ll take an initiative to take him out of the country for treatment.”

Another Jatiya Party leader, wishing anonymity said, Ershad has long been very sick and unable to walk and speak up clearly.

He said Ershad’s wife Raushon Ershad has been maintaining a distance with her ailing husband since she is unhappy as he made GM Quader Jatiya Party successor and donated his most of his assets to a trust. “Our chairman is also unhappy over the behaviors of some other of his relatives.”

Besides, the Jatiya Party leader said some party influential leaders, who are loyal to Raushon, are also avoiding Ershad. They hardly visit him.

However, Raushon Ershad visited her husband at the CMH on Thursday along with some other relatives.

Ershad’s declining health condition came to the spotlight as he was admitted to the CMH on November 27 last, before the national election.

On December 10, he went to Singapore for treatment and returned home on December 26, four days before the general election.

Ershad again went to Singapore on Jan 20 last for treatment and returned home on February 4.

Jatiya Party which joined the 11th parliamentary election as the key partner of the Awami League-led Grand Alliance bagged 22 seats and Ershad was elected MP from Rangpur 3.

Fight to have brother as successor

Raushon had reportedly established her control over the party before the 10th parliamentary election in 2013 taking a stance against Ershad’s decision of boycotting the national election, and subsequently she played the role of Leader of the Opposition in Parliament last time.

But Ershad regained his control over the party before the December-30 general election and became the Leader of the Opposition in the current parliament.

Ershad had also picked his brother to run the party in his absence on January 1 last and appointed Quader as the deputy leader of opposition three days later.

In a similar bid on January 18, 2016, the Jatiya Party chairman tried to install Quader as his successor by making him as party cochairman which is only foiled by the leaders close to Raushon.

Amid strong resentment in the party on March 23, Ershad also removed Quader from the post of the deputy opposition leader, nominating his wife Raushon for the post.

The maverick former military strongman, known for frequently changing his decisions, Ershad reinstated his younger brother GM Quader as party chairman in his absence on April 6.

A day after nominating Quader his party successor, the Jatiya Party chief donated his all assets to a trust, fuelling the family feud further.

Born on February 1, 1930 in the Koochbihar district of West Bengal, Ershad, the then army chief, took over the state power from President Abdus Sattar on March 24, 1982, introducing the martial law.

He formed 'Jatiya Party' in 1986 and was elected President the same year, triggering huge protests by other political parties.

Amid a fierce combined movement by the opposition parties, Ershad was finally forced to step down on December 6, 1990.

He was later accused of corruption as well as other offences, and put behind bars for years.

After six years of confinement, Ershad was released from jail on bail on January 9, 1997.