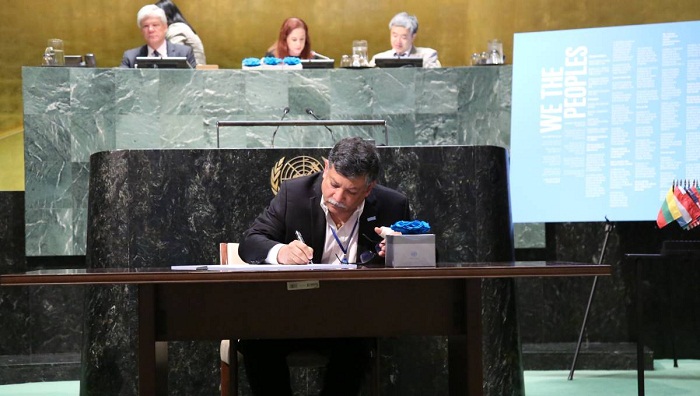 It is an initiative of the President of the 73rd UNGA to launch activities for commemorating the 75th anniversary of the UN next year.

The Permanent Representatives and Ambassadors of the member states put signatures at the symbolic ceremony arranged under this event to commemorate the UN’s Charter signing day.

Permanent Representative of Bangladesh to the UN Ambassador Masud Bin Momen put his signature on behalf of Bangladesh, said a media release on Thursday.

Before that, a poster containing the Preamble of the UN Charter was displayed in all six official languages of the UN.

A short video featuring the signing ceremony of the UN Charter and the Statute of the International Court of Justice in San Francisco in 1945 was also displayed at the event.

María Fernanda Espinosa Garcés, the President of the 73rd UNGA and Fabrizio Hochschild Drummond, Special Advisor on the Preparation for the Commemoration of the 75th Anniversary of the UN spoke at the event.

Mentioning the historic signing ceremony of the Charter of the UN, the PGA said, “I firmly believe that we can summon the spirit of San Francisco today. As we make a symbolic commitment today, we’ll also think ahead to high-level week and the concrete steps will take to keep the promises we’ve made through the 2030 Agenda, the Paris agreement and so many other instruments on the critical challenges of our times whether it would be migration, oceans, food security, terrorism, health or women empowerment.”

The speakers urged the member states to reinvigorate multilateralism and global cooperation in observance of the 75th Anniversary of the UN.