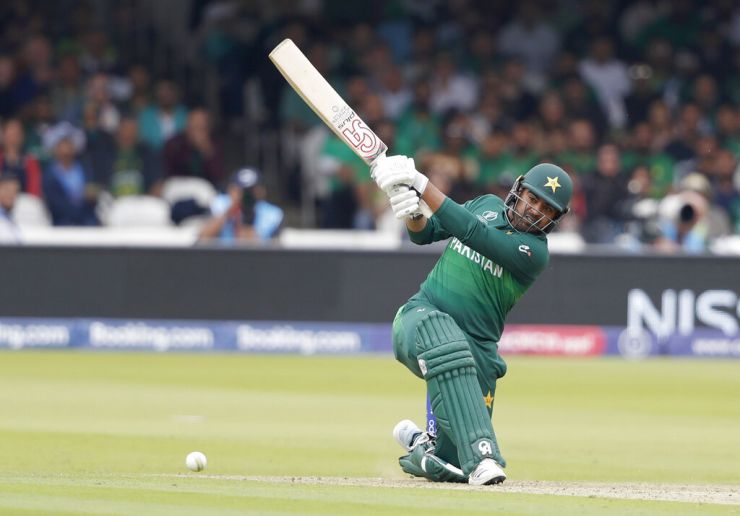 A resurgent Pakistan look like they are in form, having set a meaty 309-run target for South Africa as both sides battle it out for World Cup survival at Lord's Cricket Ground on Sunday in the 30th match of the tournament. The loser today goes home.

Pakistan need a win more than South Africa. Both teams have won only once, but Pakistan has a match in hand and a slightly better outside chance of making the semifinals. South Africa's chances are remote ─ and gone if it loses.

The predictably unpredictable Greeenshirts are trying to claw their way back from a thumping by India a week ago that left morale low and exposed the national side to widespread criticism. The Proteas lost to New Zealand on Wednesday.

They have a 3-1 win-loss record against Pakistan in World Cup history.

The match opened quietly, with a dull South Africa side lacking punch in their performance.

The openers, Fakhar Zaman and Imamul Haq, maintained a steady strike rate, posting 50 in the 8th over, and pulling together a solid 81-run partnership before the former was dismissed.

Imam got a scare in the 7th over when Kagiso Rabada sent a fullish delivery his way, just outside leg stump. Although it hit Imam's front pad and Rabada appealed for an LBW, it wasn't given. Du Plessis didn't try for a review, either.

The momentum in South Africa's game seemed to pick up a bit in the 12th over, when Imran Tahir caught Fakhar at the boundary off a delivery from Chris Morris. The umpire gave it not out since it seemed to have touched the grass before it found its way into Tahir's hands.

But Tahir had the last laugh when he got Fakhar out two overs later. The opener was just 6 runs short of 50 when he attempted an awkward scoop off the South African bowler in his maiden over, sending the ball into Hashim Amla's waiting hands.

Tahir, the oldest player this World Cup, took an extraordinary diving catch to dismiss Imamul Haq (44) off his own delivery in the 21st over, making him the leading wicket taker for South Africa in World Cups. The spinner has surpassed Allan Donald's 38 WC wickets. 100 came up for Pakistan in the 22nd over.

Tahir continued to ratchet up the pressure on the Pakistani batsmen, playing in his part in two near-misses for Mohammad Hafeez in two consecutive deliveries in the 25th over. He didn't look to du Plessis for a review on Hafeez, though, and South Africa lost their review.

Andile Phehlukwayo went on to bowl an economical 26th over, followed by Tahir, Aiden Markram and Rabada, all of whom kept the pressure up on Pakistan and restricted their batsmen to an anemic run rate of 4.9 by the end of the 33rd over. The run rate rose gradually to the mid-fives after the Hafeez wicket.

Phehlukwayo took Babar Azam's crucial wicket in the 42nd over, sending him packing with a solid 69 runs under his belt. Shortly after, 50 came up for Haris as well, making him and Azam the only two batsmen on the side to hit the milestone this innings.

Pakistan won the toss and opted to bat against South Africa. The forecast is for cloudy but warm conditions.

"Looks like a good batting pitch and some grass cover on it," Sarfaraz said at the toss. "We are not thinking about the pressure, just focusing on the game, which is very important for us."

Du Plessis said he would have bowled first even if he had won the toss.

Pakistan made two changes from its defeat to India last weekend, bringing in batsman Haris Sohail and bowler Shaheen Afridi for Shoaib Malik and Hasan Ali.

South Africa remained unchanged after its narrow loss to New Zealand on Wednesday.

Fast bowler Mohammad Amir has 13 wickets this World Cup, at an average of just 13.