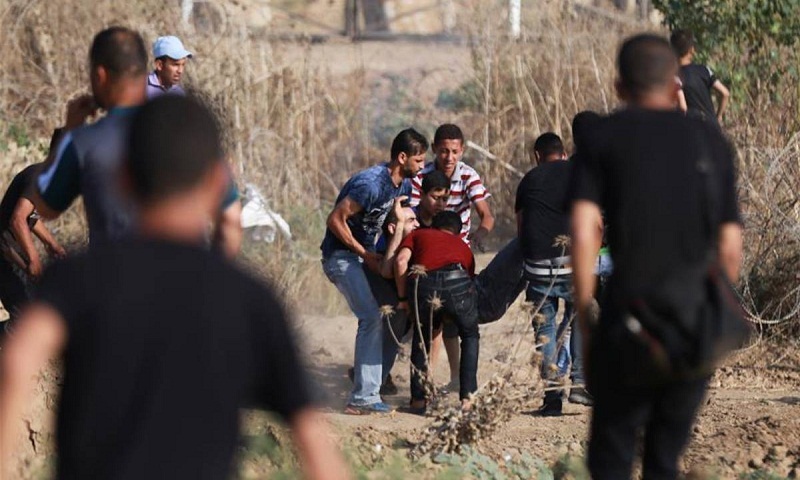 At least 81 Palestinians were injured on Friday afternoon during clashes between Palestinian demonstrators and Israeli soldiers in eastern Gaza Strip, close to the border with Israel, medics said.

Ashraf al-Qedra, spokesman of the Gaza Health Ministry, told reporters that 79 people as well as two paramedics had various injuries in the clashes with the Israeli soldiers in eastern Gaza Strip.

They said that Palestinian demonstrators gathered close to the border, waved Palestinian flags, chanted slogans against Israel and threw stones at the Israeli soldiers stationed on the borderline area.

The soldiers fired teargas canisters, rubber bullets and live gunshots to keep the demonstrators away from the fence of the border, according to the eyewitnesses, who added that several demonstrators were injured.

The highest commission of the event said at the end of the rallies that next Friday's protests will be held in eastern Gaza Strip against holding the U.S. economic workshop in Manama, Bahrain.

Gaza health ministry had earlier said in a press statement that since the outbreak of the protests on March 30 last year, the Israeli army has killed 306 Palestinians and wounded more than 17,000 with live ammunition in eastern Gaza.

Egypt, the UN and Qatar have been mediating between Israel and Hamas-led militant groups and factions to defuse mounting tensions between the two sides that usually promotes to military escalation.

The weekly protests call on Israel to end Israeli blockade imposed on the Gaza Strip since 2007 after Hamas seized control of the coastal enclave.