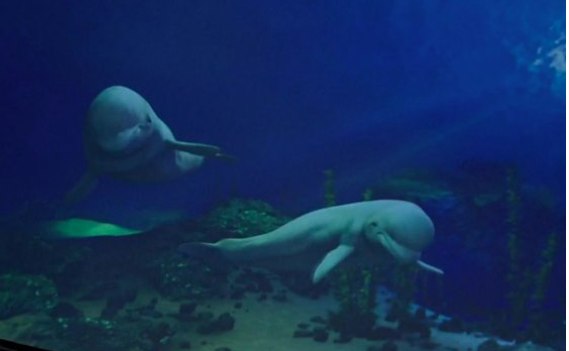 Two beluga whales from a Shanghai aquarium have arrived in Iceland to be taken to a whale sanctuary there.

The 12-year-old whales flew halfway across the globe in special containers.

Born in the wild, Little Grey and Little White were captured at around two years old and performed for years as an attraction.

Belugas are thought to suffer in captivity, and there had been mounting pressure on the British firm that runs the aquarium.

Merlin Entertainment, which also runs Legoland and Madame Tussauds, bought Changfeng Ocean World Zoo where the two whales lived in 2012, and started looking for a home for them.

Their new sanctuary is some 6,000 miles (9,656 km) from Shanghai, in Klettsvik Bay, on the Icelandic island of Heimaey. Their long voyage will also include travel by truck, and a ferry.

"We have been working with Little White and Little Grey for the last 18 months to make sure that they will be prepared and ready for the long journey," said Andy Bool, head of the British conservation charity Sea Life Trust.

The bay is the world's first open water beluga sanctuary, and will "provide a more natural sub-Arctic environment and wilder habitat for these amazing whales to call home," the charity said.

The same bay was previously home to another showbiz whale, the orca Keiko from the Free Willy film franchise.

He was released in 2002, but died of pneumonia 18 months later after swimming to Norway and making his home there.

This time the bay, which measures 32,000 sq m (104,900 sq ft), will be netted off to protect the two female whales. It is thought Little Grey and Little White would not survive on their own in the wild.

There are plans for a visitors' centre, and tourists will be able to view the whales from boats.

The two will be studied by scientists to see how they adapt to their new home. If they thrive, they could live to between 40 and 60 years old.

Depending on how Little Grey and Little White fare, the sanctuary could become home to other belugas as well.