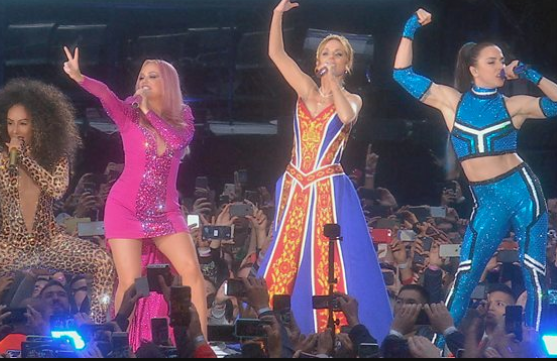 Geri Horner has apologised for quitting the Spice Girls in 1998, as the band played the last date of their reunion tour.

"I need to say something I should have said a long time ago," she told fans and her bandmates at Wembley Stadium.

"I'm sorry. I'm sorry I left. I was just being a brat. It is so good to be back with the girls that I love."

Geri, aka Ginger Spice, walked away from the band at the height of their fame 21 years ago.

At the time, she said she was suffering from exhaustion and needed a break.

Years later, in the documentary Giving You Everything, she explained she'd become distanced from the rest of the band.

"I felt I didn't belong any more. They didn't need me any more, really, and I definitely felt very redundant."

Geri's apology came on the 13th and final date of the Spice Girls' UK stadium tour, just before the band played Goodbye, the number one single that addressed her departure.

And it wasn't the only emotional moment.

The band brought their mothers and children onto the stage during the encore, to serenade them with Mama, while Emma Bunton was reduced to tears during Viva Forever.

"She's gone," Mel C acknowledged. "The Bunts has gone. We had a little wager on who'd cry first."

But overall, the mood was celebratory, with the band charging through hits like Stop, Who Do You Think You Are and Wannabe like it was the first time they'd performed them.

The quartet arrived on stage at the front of a huge, semi-circular catwalk, dressed in updated versions of their iconic 1990s outfits - Scary in a leopard-print catsuit, Sporty in a diamanté-studded gym clothes, Ginger in a Union Jack ball gown, and Baby in a blur of pink and pigtails.

With fireworks shooting into the sky, they launched into the salsa-riffic Spice Up Your Life, as the video screens updated the Girl Power manifesto to include all "ages, races, abilities, sexualities, religions and beliefs".

The sound problems reported at the start of the tour were gone, although the group were sometimes drowned out by the sheer volume of 80,000 fans singing back at them.

The set-list wisely stuck to their first two albums, and the song arrangements were tight and imaginative. Even the unloved, post-Geri single Holler got a tropical overhaul that rendered it briefly tolerable.

But most importantly, the band's cheeky, stupid chemistry was still intact.

"Our audience has got a lot hotter," observed Mel B at one point.

The atmosphere was certainly more hen night than pyjama party - but in an era where pop stars increasingly stress their fallible, human side, it was refreshing to see the Spice Girls celebrating fun and friendship.

Their fondness for each other was apparent throughout, with supportive hugs, gentle mockery and knowing glances the order of the day. The supposed rift between Mel B and Geri, caused by the revelation they had once slept together, was either forgotten or incredibly well-disguised.

Instead, they had each other in stitches during a scrappy karaoke segment, where the musicians played snippets of Spice Girls' solo hits, only to discover the singers couldn't remember the words. (They did, however, know the lyrics for Adele's Someone Like You, which was a stroke of luck, given she was in the audience.)

A much-rumoured cameo by Victoria Beckham failed to materialise, and the band jokingly changed the lyrics for Wannabe to reflect her absence: "Easy V doesn't come for free... Where is she?"

But to be honest, they didn't need one.

Without casting aspersions on Absent Spice, the boisterous spontaneity of Scary, Sporty, Baby and Ginger was enough to prove why the Spice Girls remain Britain's best girl band.

Sure, Girls Aloud had more innovative songs, the Sugababes had more poise, and Little Mix are better singers - but the Spice Girls had something else: They were about freedom, self-belief and disobedience, in an era where pop stars - and female pop stars in particular - were supposed to shut up and behave. Imagine what that felt like for a teenager in the 90s.

In the 21 years since the Spice Girls last played Wembley, reality has dashed some of those dreams, for the band and their fans alike, but for two brief hours on Saturday night, they could all remember how it used to be.

"This is a night to celebrate," said Mel C. "Being in Spice World is incredible."