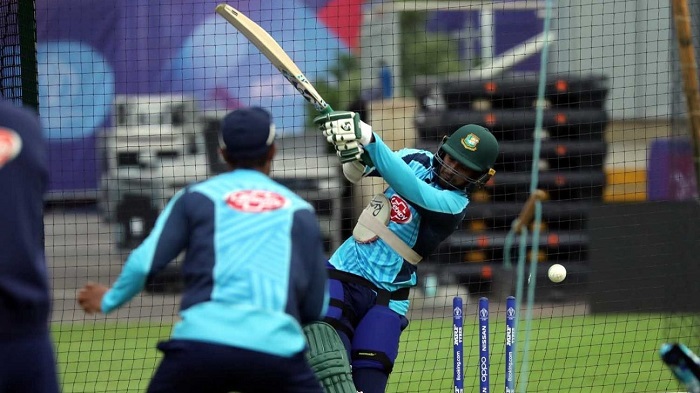 The Bangladesh batsmen had a major homework to get through in the lead-up to their next game, against West Indies in Taunton dealing with the short ball.

Looking at the way the West Indian pacers have gone so far at the World Cup, Bangladesh are expecting a barrage of short balls, particularly with the newish ball.

West Indies took seven wickets with short or short-of-good-length deliveries against Pakistan and five against Australia. In the abandoned match against South Africa, both their wickets came courtesy short balls.

It's not something Bangladesh are unaware of. Back in the Caribbean in July last year, Shannon Gabriel, Kemar Roach and Jason Holder mixed the short and length ball brilliantly in the Test series to blow them away.

Only five wickets came from the shorter deliveries, but it forced the Bangladesh batsmen on to the back foot, leaving them expecting bouncers, and 15 wickets fell to full and length deliveries.

While Bangladesh handled the short ball better in the ODI series that followed as well as last month in Ireland, the pitches were far slower than what is expected in Taunton.

So, two days off from the contest, Tamim Iqbal, Mushfiqur Rahim and Shakib Al Hasan first, and then Mahmudullah and Soumya Sarkar, were given a roughing up by the net bowlers as well as batting coach Neil McKenzie, who had the side-arm thrower.

Mostly it was ducking and weaving, and getting behind the line of the ball. Soumya was aggressive, hitting a few out of the ground as well as top-edging some. Shakib, Tamim and Mushfiqur, the most experienced men in the line-up, handled it with a mix of aggression and solid defensive play. Mahmudullah tried to get behind the line, before choosing to either duck or drop it near his feet.

They paid a price too, thankfully not too big - Mustafizur Rahman struck Mushfiqur on the right forearm with a shorter one, forcing the batsman to walk off and not return.

Tamim also felt the full brunt of McKenzie's hurls, as he got little time to react. But the South African also sent in a few full tosses and half-volleys, which Tamim laid into with relish. After all, as Tamim pointed out, while the West Indians would go for their throats in the first 15 overs or so, there are likely to be some loose deliveries too.

"We normally try to simulate in the nets what our opponents are likely to do," Tamim said. "They usually target us with the short ball but they do the same against all sides in the first ten to 15 overs. They also give run-scoring opportunities. We have to prepare for both, that's why we are working hard in practice. We want to make sure it is not a surprise for us.

"We have an idea about their batsmen and bowlers, but I have noticed their different planning in the World Cup. It is not the same thing that we faced in Ireland or West Indies. They are focusing heavily on the short ball, but if you handle it well, there'll be opportunities to score runs. They have been bowling this way against all sides."

Tamim said that the familiarity with the West Indies fast bowlers would give Bangladesh a bit of an edge, although conditions might have a say in the way things pan out.

"The first three bowling attacks I played against in this World Cup [South Africa, New Zealand and England], all were more or less equal," he said. "West Indies have pace, three bowlers who bowl above 140. The good thing is we have played all three in the last year-and-a-half.

"So there won't be anything new for us. Yes, if the conditions are different then that might be something. But if we can bring our A game day after tomorrow, then we have a good opportunity to win."

Tamim was also prepared to call Bangladesh "favourites", particularly due to their recent record in ODIs. Bangladesh have won seven out of their last nine games against West Indies, having won two bilateral series as well as the tri-series in Ireland where they beat West Indies on all three occasions.

"Of course, why not? We have won more than them in the recent past. We can be favourites, of course," Tamim said in response to a question. "In Ireland, we won all three matches against them. It does not matter to me who are favourites and who are not. Cricket is such a game that whoever brings the A game has a chance on that particular day. That is the case for any team in this World Cup.

"It is not important who has that tag, it's about whoever plays well. If you see West Indies' first two matches, they looked a different side than what they were six months back. Then again, if you look at how we played our first two matches, we also looked a different side. We were challenging the top teams in these conditions. One went in our favour, one didn't. It will be a good match I think; we just need to see who brings the A game on the given day."

For that A game to really take shape for Bangladesh, they will need to have their best anti-bouncer plan in place and execute it right.