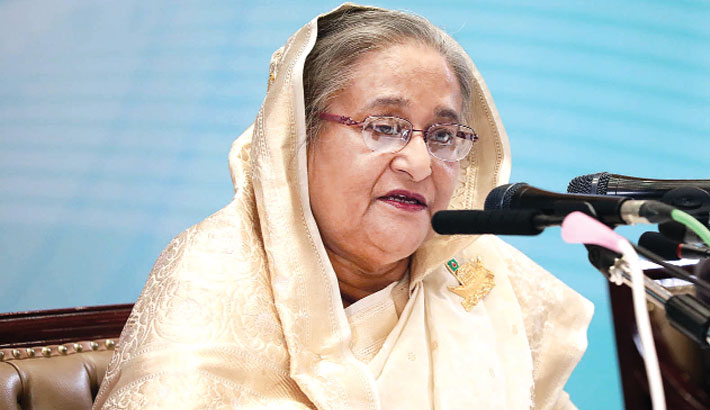 Terming the proposed budget for the 2019-2020 fiscal as pro-people, Prime Minister Sheikh Hasina on Friday slammed the critics of the fiscal plan for finding faults in everything just for the sake of it.

“There are some people who have mental sickness. They like nothing. When a democratic system exists and development is achieved, they do not see anything good in that. It is a kind of sickness,” she said.

The premier was speaking at a post-budget briefing at the Bangabandhu International Conference Centre in the capital.

The premier held the briefing due to the illness of the Finance Minister AHM Mustafa Kamal who placed the proposed Tk 5,23,190 crore national budget for 2019-2020 in parliament on Thursday with a target of higher growth, wider tax net, more investment and jobs.

It is a practice that the finance minister faces the media a day after the budget proposal and explains the proposed budget.

The Centre for Policy Dialogue (CPD) on Friday claimed that the proposed national budget would only safeguard the interest of high-income people.

Sheikh Hasina raised questions over the researches carried out by various think-tanks.

“I do not know on what kind of researches are being conducted by the research organisations. Let them criticize the government. We will take the sound advices and turn deaf over negative remarks,” she said in good stride.

The premier said her government considered the needs of the common people into cognizance.

“The main thing is whether the general people are happy or not. This is the highest ever budget proposal and the fruits of the budget will reach the door step of every people,” she said.

Slamming the research organizations, she said, “Our target is to make the country free from poverty and achieve development…we’re working to this end…Bangladesh is no longer a country of beggars.”

Responding another question on the cut in interest rate to single digit, Sheikh Hasina said

“The interest rate should not be in double digit. Businesses can not be run with more interest rate with accrual system. We will take measures to bring an amendment to the banking law,” she said.

Replying to a question on whitening black money, Sheikh Hasina said her government paved ways for whitening the undisclosed money with a target of getting investment in economic zones.

“We have given the opportunity so that the undisclosed money is shown and invested in 100 economic zones,” she said.

She said the undisclosed money holder must pay 10 per cent additional tax while investing.

Referring to the capital market, Sheikh Hasina said her government would establish good governance in the market.

“We want to see a flourished capital market along with strong economy,” she said.

She also said share market is the best place to collect long-term loans for investing in the industries.

Referring to the various incentives for share market, the premier said tax-free dividend income is increased to TK 50,000 while double taxation on dividend from listed companies will also be removed to rejuvenate the country’s capital market.

Responding to another question on creating 3 crore employment by 2030, the premier said her government would achieve the target by that time.

Mentioning the recent crisis of day workers, she said the farmers did not get helping hands for harvesting paddy due to creation of employment.

“Some Tk 100 crore has been allocated in the proposed budget to provide education on various issues, including technical, vocational and training,” she said.

“When we talk about employment, everyone thinks it is a job. Is it possible to provide job to 16 crore people?  Which country gives jobs to all its people?” she asked.

Responding to a question on ‘golden battle’ mentioned in the budget speech, the premier said this battle is for building a ‘Golden Bangla’.

“This war is not for destruction but to create …. A welfare state,” she said.