Amazon sued over Alexa child recordings in US 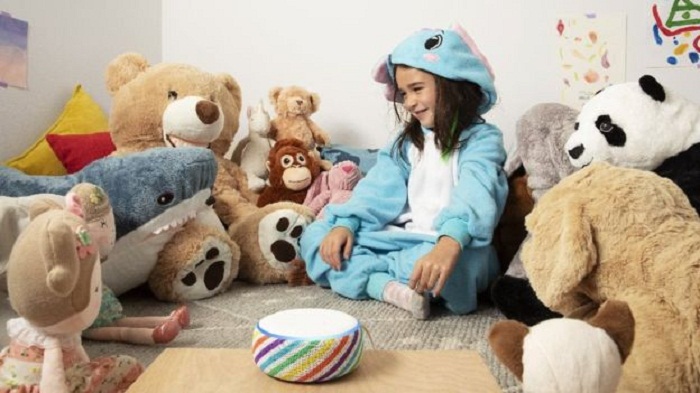 Amazon is being sued over its smart assistant's recordings of children.

Two US cases allege the firm lacks consent to create voiceprints that could let it keep track of a youngster's use of Alexa-enabled devices and thus build up a "vast level of detail about the child's life".

Amazon has said it only stores data once a device-owner has given it permission to do so.

And it says parents can delete a child's profile and recordings.

Lawyers involved in the cases are seeking damages for the two plaintiffs involved, as well as others who are being invited to join the class-action lawsuits in nine states where it's claimed Amazon is in breach of privacy laws.

Amazon said in January more than 100 million devices featuring Alexa had been sold worldwide, ranging from its own Echo speakers to third-party products including headphones, fridges and televisions.

"Amazon has a longstanding commitment to preserving the trust of our customers and their families, and we have strict measures and protocols in place to protect their security and privacy," a spokeswoman told the BBC.

Two class action cases are being pursued, one filed in Los Angeles on behalf of an eight-year-old boy and the other in Seattle on behalf of a 10-year-old girl.

In both cases, the children had interacted with Echo Dot speakers in their homes, and in both cases the parents claimed they had never agreed for their child's voice to be recorded.

The complaints say Alexa devices could have been designed to only send a digital query rather than a voice recording to Amazon's servers - although processing the audio locally would have disadvantages such as potentially driving up the cost of the devices involved and making it harder for Amazon to deploy updates to its voice-recognition tech.

Alternatively, it is suggested that Amazon could automatically overwrite the recordings shortly after they have been processed, although this might affect the smart assistant's ability to deliver personalised replies.

Even if neither of these options were adopted, the plaintiffs suggest that more could be done to ensure children and others were aware of what was going on.

"At no point does Amazon warn unregistered users it is creating persistent voice recordings of their Alexa interactions, let alone obtain their consent to do so," the complaints state.

"Neither the children not the parents have consented to the children's interactions being permanently recorded."

Amazon has referred reporters to a blog it published last month about a subscription service designed to help parents manage their children's use of Alexa.

It notes that parents can review and delete their offspring's voice recordings at any time via an app or the firm's website. In addition, it says, they can contact the firm and request the deletion of their child's voice profile and any personal information associated with it.

The BBC also quizzed the executive in charge of Alexa about the matter last week at the firm's re:Mars conference before the complaints had been filed.

Dave Limp said the firm only profiled under-13s if parents had agreed to its terms of service.

"You have to verify through a parent that the parent themselves has given consent for the child. And we do that by verifying an actual credit card number.

"So if you don't that, then we do do not keep any of the data for the child and we wouldn't ever do that."

He added that only about 1% of utterances were ever checked by its staff, and even then those involved would not be shown the user's name or address.

However, he acknowledged that Amazon could do more to flag that people - rather than just automated checks - were involved in reviewing the recordings.

At present, Alexa's privacy notice says that past voice requests are used to improve its services, but does not explicitly say they are listened to by humans.

"If people don't think we're being as transparent on that, we have no issue being more transparent."