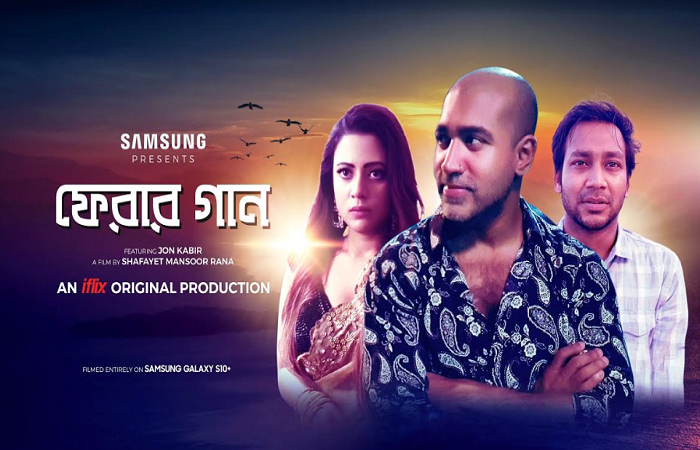 For the first time, a smartphone has been used to film a professional production in Bangladesh. Renowned Director Shafayet Mansoor Rana has directed ‘Ferar Gaan’. The short film was released today on iflix and the entire film has been shot by Samsung Galaxy S10+.

The story revolves around Rubab Khan (Jon Kabir) who is a famous star of the country. His music is adored by everyone and he has millions of fans. However, he is very ego-centric and looks down upon people. During a concert, a super fan (Sayeed Zaman Shawon) of his manages to make his way to the backstage where he asks for a selfie. In response, Rubab behaves rudely with him to the point when the fan has to be thrown out by his guards.

The next morning, the famous star finds out that he has lost his gifted voice. His voice was ruined. He tries everything to find out the reason but to no avail. He started to lose everything, his career, his fans and even his girlfriend (Azmeri Asha). Realization struck him and he sets out to find the fan whom he had mistreated.

Shafayet Mansoor Rana’s short film ‘Ferar Gaan’ revolves around the story of searching that devoted fan. It will be released on iflix from June 03, 2019.

The entire film was recorded with Samsung Galaxy S10+. The Galaxy S10+ is Samsung’s flagship phone which comes with 3 rear Pro-grade cameras consisting of a 12MP wide lens, 12MP telephoto lens, and 16MP Ultra-Wide lens which records 4K video very easily. No additional lenses were being used to shoot the film. Only Samsung Galaxy S10+ original camera lenses were being used in 4K resolutions for the entire film shooting. It’s a fantastic way to showcase the camera prowess.

Regarding the production, Md. Muyeedur Rahman, Head of Mobile, Samsung Bangladesh said, “Our team is very excited to work with the cast of ‘Ferar Gaan’ and specially the fact that the entire production has been shot with Galaxy S10+. This isn’t the first-time smartphones has been used to shoot films around the world however, it is the first time in Bangladesh. And we are very pleased that it has been Samsung Galaxy S10+ that has been used. We hope that our customers and audiences will like this interesting short film.”