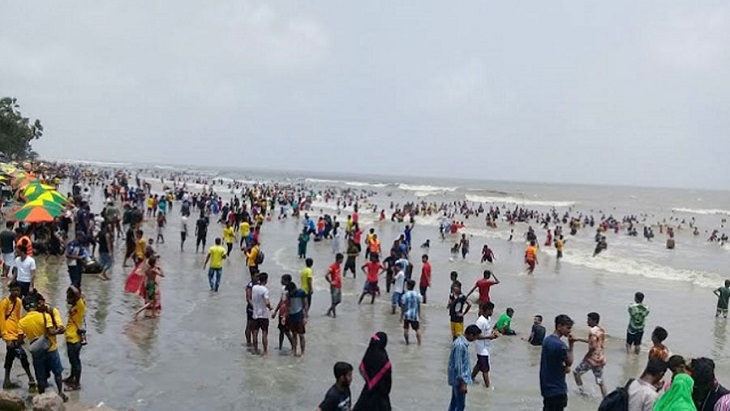 A large number of holidaymakers have thronged different recreational, entertainment and tourist spots across the country to enjoy the five-day Eid festival holidays.

Apart from spending Eid with their families, many Dhaka or other major city residents either left for tourist destinations in the country or have flown to favourite international destinations like Kolkata, Bangkok, Singapore or Kuala Lumpur, tourism officials said.

Travelling during the Eid vacation is a growing trend for Bangladesh with internal tourism making a sharp mark, the officials said, adding whether single or with friends and families the country’s growing middle class chose to spend time in resorts or tourist spots.

Tourists are visiting the spots of their choices amid sporadic showers since Eid day. Sources said tourist attendances were heavier from Friday.

Almost all the hotels, motels and guest houses near tourist spots are witnessing 100 percent occupancy between June 6 and June 15.

Targeting the Eid vacation, tour operators, hotel-motels and transport companies made special arrangements for the tourists. They have been making windfall profits by offering a number of tour packages for Eid at both home and abroad.

Like every year, the tourist city Cox’s Bazar has become the number one tourist attraction for a large number of tourists.

There are around 450 residential hotels and guesthouses for tourists in Cox’s Bazar, but officials said it was inadequate to accommodate more than One lakh guests. A day after Eid, the number increased and toursist were running from one hotel to the other to get one room.

Along with the beach visitors, many thronged Dulhajara Safari Park, Himchari, Ramu Temple, Moheskhali and other tourist spots of the district.

Jahed Tasin, a young entreneur in the southeastern port city of Chottogram, told the daily sun that travelled to Cox’s Bazar town on the Bay of Bengal without any plans and could get a hotel accommodation of his choice. “All the hotels are full … finally I had to settle with a no-star hotel,” he added.

Shafiqur Rahman, vice-president of Cox’s Bazar Hotel-Motel Guest House Owners’ Association, said the beach on the Bay of Bengal are crowded for two or three days’ holiday during any festival or a long national holiday. This time, due to the five-day holiday, almost all the hotels were booked.

Zillur Rahman, superintendent of Cox’s Bazar tourist police, said they are ensuring that the holidaymakers’ had adequate security. Several police teams weree patrolling the area on vehicles or on foot, while a police control room near the beach provided 24-hour security service, the officer added.

Shakil Ahmed, CEO of Tourism Express, said: “Now I am in Sajek with my guests. The whole Sajek is abuzz with tourists. Every cottage in Sajek is occupied.”

“Eid is the peak-time for any tourist destination. As people get long holidays during Eid, they want to spend quality time with their friends and family” he added.

A large number of tourists have converged on tourist spots like Nilachal and Shailapropat in Bandarban hill district in the country’s southeast bordering Myanmar.

All the hotels, motels and rest houses are now packed with tourists. No residential hotels in Bandarban remain vacant for tourists. The pressure of tourists may last four or five more days.

Sayedur Rahman, a private employee, has taken a three-day tour to the Bandarban with his wife to enjoy during the holiday. “Eid vacation is a suitable time to make a pleasure trip and pass some time close to nature,” he said.

The other main destination was northeastern tea-growing district of Sylhet where too, hotels and resorts were all booked.