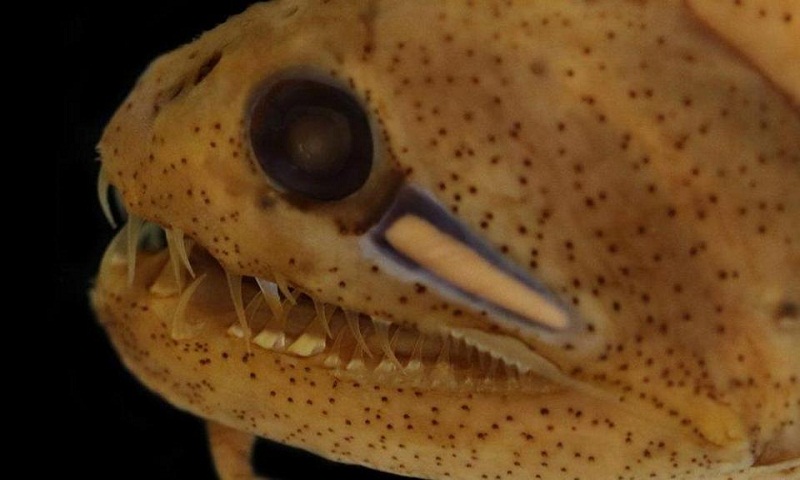 Scientists have found what makes the teeth of deep-sea dragonfish transparent, a unique adaptation which helps camouflage the predatory creatures from their prey.

According to the study published in the journal Matter, the adaptation results from their teeth having an unusually crystalline nanostructure mixed with amorphous regions.

The findings could provide “bioinspiration” for researchers looking to develop transparent ceramics.

Deep-sea creatures have evolved some fascinating adaptations such as bioluminescence, eyes that can see in low light, and mouths that can engulf much larger prey.

Some species, such as the deep-sea dragonfish (Aristostomias scintillans), have transparent teeth.

“It’s an adaptation that, to our knowledge, has not yet been explored in detail,” said Audrey Velasco-Hogan, a PhD student at the University of California San Diego in the US.

“By studying why these teeth are transparent, we can better understand deep-sea organisms like the dragonfish and the adaptations they evolved to live in their environments,” Velasco-Hogan said.

Transparent teeth, along with a dark body, make the dragonfish essentially invisible to their prey, she said.

Because of this camouflage, dragonfish are among the top predators of the deep sea despite being small -- measuring about 15 centimetres long -- and relatively slow.

“They spend most of their time sitting around with their jaws open, waiting for something to come by,” Velasco-Hogan said.

“Their teeth are always exposed, so it’s important that they are transparent so they don’t reflect or scatter any bioluminescent light from the environment,” she said.

To solve the mysteries of the dragonfish’s dental disguise, researchers imaged and analysed the nanostructure of the teeth using a combination of electron microscopy, focused ion beam and nanoindentation tests.

They discovered that the teeth have unique characteristics both in their outer enamel-like layer and inner dentin layer, reports HT.