There was only one television channel BTV back in the 80s. People used to skip or postpone their less important jobs just to have a quality time with the family members by watching a few selected programmes. Among these, the performance of Bogra Youth Choir was super-entertaining and had special appeals to the viewers of the entire country. Bogra Youth Choir used to perform regularly on BTV in the 80s and 90s. Celebrating Eid without a show of Bogra Youth Choir was quite unimaginable. People of all classes, religions and ages would sit in front of their television sets to enjoy the magnificent performances of this group. Bogra Youth Choir had been an inevitable part of the childhood memories of the previous generation. They still miss watching the magical presentation of this group and its leader Toufiqul Alam Tipu. This generation does not know much about this cultural group. So, here I am writing about Bogra Youth Choir and its leader Tipu Bhai.

Toufiqul Alam Tipu, popularly known as Tipu Bhai in the musical industry of Bangladesh, is the founder secretary of the non-political cultural organisation called Bogra Youth Choir. He has pioneered modern form in performing art in Bangladesh. He could think and act beyond his own time. He was born on 1st August in 1946 in Bogura. From his childhood, he was very interested in music. His eldest sister, Alter Banu, inspired him to sing and dance. Later on, his father late Akbar Hossain Akand, a progressive member of national assembly and a professional public prosecutor, gave him a green signal to become what he wanted to become. Tipu Bhai chose to become a professional cultural worker. But he could not receive formal training in music. He learned from whatever sources he got. He started performing in various stages in Bogura and other nearby districts. Mass people along with artists appreciated and liked his performance. The famous female writer of that time, Romena Afaz, complimented him to be the "most dynamic performer" she had witnessed. Later on, in the early 70s, he formed “Udichi” and “Sangskriti Sangsad” and started performing on different stages in different districts of the country.

One day, Tipu Bhai was singing a revolutionary song in front of a group of people who belonged to the grassroots. After finishing the group performance one farmer from the audience confusingly urged them to sing a “Bangla” song. That was the epiphanic moment for Tipu Bhai. He thought that these illiterate poor people would be able to understand the in-depth message of any song if it is played and performed in their own language. He too sang for recollecting the heroic memory of our language martyrs. Then again, he asked himself for exactly which language the fighters fought and the martyrs sacrificed their lives. He found his answer. They fought for their own version of Bangla. A farmer from the remote village near Bogura did not fight for the standard form of Bangla, rather he fought for his very own regional Bangla language. From that day on, he started working on writing lyrics in the dialect of Bogura. He, even now, proudly says that the dialect of Bogura is his mother tongue.

Toufiqul Alam Tipu formed Bogra Youth Choir in 1976. Late Ayesha Ashraf was the first president of this nonpolitical socio-cultural organisation. He along with other 12 enthusiastic and artistic minded people started their cultural struggle together. He faced numerous challenges at the very beginning. Many renowned artists and producers criticised his way of using "unsophisticated" and local words in his songs. He took every single challenge positively and never stopped writing "ancholik" songs. The famous drama personality Golam Kader inspired him to keep on doing what he was up to. Nawajesh Ali was the one who first produced and promoted Bogra Youth Choir on BTV in 1978. From then on he regularly performed and won the hearts of million masses.

Toufiqul Alam Tipu wrote songs on various social and cultural issues. He first introduced "acrobatic" form of choreography in Bangladesh. Songs written in dialects are usually called folk songs which also deal with the matters of folk people. Tipu Bhai is a little different in this case. He mixed folk with modern art and presented a new style. He wrote songs about the Liberation War of Bangladesh, freedom and independence in his dialect. It was a new approach back in the 80s. He courageously wrote "Ostro da joma disi, training da na" (we have just submitted our ammunition, not our training) to remind the enemies of our nation that we are always ready to fight for protecting the honour of our dearest mother (land). His sarcastic song "hami bissho sundorir purtijogitat ekta candidate pathamu, nam Sukimon" (I will send a candidate named Sukimon to Miss World competition) in order to ridicule the contradictory picture of the third world countries. Sukimon is a representative of the third world women who cannot afford to have proper food and other beauty products. Still she is slim, because she is hungry. She has a natural curvy hair, because she has no money to buy and use oil and shampoo. She cannot buy fashionable clothes, but she can manage to walk without fully covered clothes. The way Tipu Bhai satirised this glittery hypocrisy of organising a beauty contest where one big part of the world starves is just remarkable.

It was a strongly patriarchal society in which women were not given proper rights to education and payments. He wrote songs for these underprivileged women. "Beder meye Jotsna hamar nam" is one such song in which a lady sings for her rights to have equal opportunity and treatment as a worker. People in the villages and urban areas used to give dowry. Tipu Bhai stood against this corrupted tradition. He composed a musical play which became very popular among the mass audience. He wrote songs for supporting female education. He sang for establishing gender equality. Tipu Bhai wrote songs on every single issue that would address the anxiety and suffering of ordinary people. 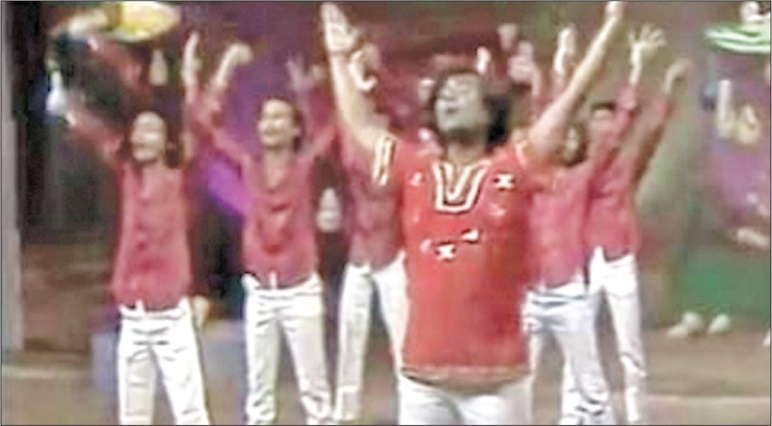 Tipu Bhai's song "Oi Kalo Chhuri da hamak pagol korise" (that black beauty made me mad) became immensely popular. People still recall the brilliant performance of Tipu Bhai and his partner Ms Queen. However, many people do not know that this song was given a red signal for having rough words like "chhora" and "chhuri". The same thing happened with other songs like "tui kon reshoner chaul khas, bhutki sundori" (from where do you buy and eat rice, my bulky beauty?) and "Tumi hamar ghata chhara Dao" (stay away from my path). But Tipu Bhai, by showcasing his extraordinary talent as mind-blowing performer, established these informal vocabularies and became the apple of people's eyes.

Bogra Youth Choir worked in a few projects under Family Health International (FHI). Tipu Bhai wrote songs and short musical plays for promoting the importance of pure water, road safety and so on. He worked in a project of HIV/AIDS to promote secured life. His anti-drug campaign became famous in the early 21st century. Tipu Bhai worked with young enthusiastic people to create a generation which will lead in future.

One very interesting piece of information is unknown to many people. Tipu Bhai used to perform the duet songs with a particular lady named Queen. My readers may recall her. Their on-stage and on-screen chemistry was just lajawab. For this reason, many thought Ms. Queen as Tipu Bhai's real life partner. In reality, Tipu Bhai is married to someone else. His wife, Mahabubub Nesa, is a teacher in Bogra Cantonment Public School. She has nothing to do with singing and dancing. Mrs Tipu is a full-fledged teacher!

Many years have gone by. We have not been seeing the magnificent and magical performances of Bogra Youth Choir. Once it created magic and brought a revolutionary change in the musical industry. Unfortunately, the government could not patronise this cultural group. This is why Tipu Bhai could not make another Tipu Bhai. In our country, musicians have to rely on other sources for earning breads for their families. A professional musician cannot survive on the basis of music only. As a result, passion fails and hunger wins. Let's bring Bogra Youth Choir back. I hope our government will take the responsibility to let the artist live and work for longer periods. Then someday we can revive the 80s Eid celebration once again. Old is never old. Old is gold.