Woman wakes to find 11ft alligator in her kitchen 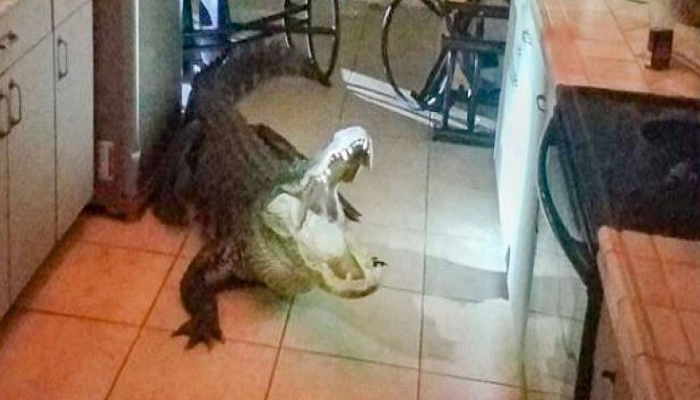 A 77-year-old woman was woken up in the middle of the night by what she thought was an intruder - but instead found an 11ft alligator in her kitchen.

Mary Wischhusen heard a large crash at her home in Clearwater, Florida, at around 3.30am.

"I had this beautiful face staring at me as though he belonged there," she told Spectrum News.

"It was just laying there. It's like he made it all the way through the kitchen and he thought he was so smart."

She said she went back to her bedroom to call the police and played games on her computer to calm herself down while she waited for help to arrive.

"I was hyperventilating a little," she said.

Wischhusen wasn't the only one to alert the authorities.

Clearwater Police released footage of the alligator thrashing around in the kitchen after it had knocked over and broken several bottles of red wine. They also released the audio of Ms Wischhusen's phone call.

"I have a gigantic alligator who came in through my garage and is sitting in my kitchen. A huge one," she said.

Asked by the call handler if it was in her house, she replied: "Yes, it's huge!"

"The alligator did suffer minor cuts to a shoulder but the majority of the red liquid on the floor in the photos was wine," the police force said.

"There was only one person home at the time of this incident and there were no injuries to the homeowner, trapper or officers.

"The alligator will be taken to a private location locally to rest and recover from what the trapper described as a traumatic experience for the gator.

"If the gator is deemed to be a good candidate for relocation, then the alligator will be taken to a private alligator farm in Fort Meade," the force added.