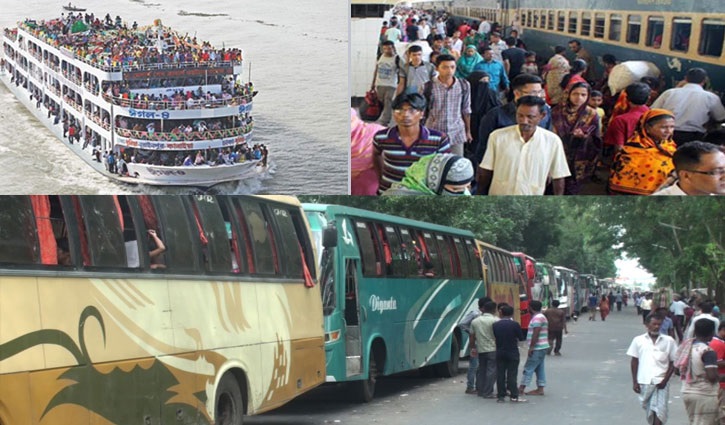 The blessed month of Ramadan is coming to an end and Eid-ul-Fitr is fast approaching. Eid-ul-Fitr, the biggest religious festival of Muslims, is expected to be celebrated on June 5 as it is dependent on moon sighting. Eid-ul-Fitr is celebrated in Bangladesh with great éclat. On this day everyone tries to dress well and prepare improved foods according to their ability. Relatives and neighbours also share the joys of this festival.

Everyone wants to celebrate their Eid with their family, no matter how far that place is from where they live. But going back to home to celebrate Eid is not so easy especially from Dhaka. As everyone starts to go to home at the same time few days before Eid, it becomes very difficult to arrange transportation. Wealthy people go using their own vehicles. Some people rent cars from rental companies and some people travel by plane. But most of the people just rely on public transport-bus, train and launch.

This year, a total of 1.47 crore Eid holidaymakers started leaving Dhaka, Narayanganj and Gazipur as many launch, bus terminals as well as rail stations have been experiencing a huge turnover of home-goers. Around 1.10 crore home-goers are leaving Dhaka including the two city corporations (South and North) while 25.50 lakh people will leave Gazipur ahead of Eid, according to Pre-Eid annual report of The National Committee to Protect Shipping, Roads and Railways. About 11.50 lakh people will go to their village home from Narayanganj, it said. About 55 per cent of this large number of passengers will go by road while 25 per cent by the waterways and the rest will go by railways.

The formal Eid journey has started from 31 May and it will continue till 5 June, the possible Eid day. City dwellers, especially the family members of both government and private job holders, started leaving the capital from 31 May. Though the official holiday will begin today, many employees and officials of government, semi-government and private offices have chosen to send their families a bit early taking leave for yesterday to avoid the mad rush of people just ahead of Eid.

After collecting train tickets with too much of hassles, Eid holidaymakers suffered immensely following disruption in the schedules of a number of trains, particularly of those that run on northern routes. The homebound people had to wait for hours together at Kamalapur Railway Station since morning due to the awful delay in train movement.

Rush at Sadarghat launch terminal has started to increase. But it is reported that the holidaymakers are suffering harassment at Sadarghat Launch Terminal. Porters are allegedly charging toll against heavy bags of passengers. The porters in yellow uniforms gather around the passengers and demand money against heavy bags and other things. Even if the passengers themselves carry their heavy baggage, they have to pay money. However, extra launches are ready for the excessive passengers. Besides, steps have been taken for moving challenged people in launch terminal. There are also ambulances to take people who fall sick at the lunch terminal.

Transport owners are charging extra fare from home-goers from 26th Ramadan, increasing their plight. However, it has been said that vigilance teams will remain active round-the-clock in making sure that no passenger is charged extra fares on buses during Eid journey. But this year there is no fear of traffic jam in roads and highways during Eid journeys. The condition of roads and highways is better than that of any other years in the past. There has been no news of traffic congestion till now, though the Eid journey has already started. There is no traffic jam on Dhaka-Chattogram highway. After opening of the 2nd Meghna, Gumti bridges, traffic condition has improved. Recently, Prime Minister inaugurated the much-awaited four-lane Second Meghna Bridge and the Second Gumti Bridge on the Dhaka-Chattogram highway. During this Eid vacation, people are enjoying smooth journey compared to the previous years.

The government has taken several initiatives to make the homebound journey of the dwellers of Dhaka safe and secure during the upcoming Eid-ul-Fitr. All engineers serving under the Road Transport and Bridges Ministry have been instructed to complete the highway repair works seven days before the Eid. Trucks and lorries will not be allowed to ply on highways across the country three days before Eid-ul-Fitr in a bid to ensure smooth journey of the home-bound people. The government has asked garment factory owners to provide Eid workers their holidays in phases to avoid an extra rush ahead of Eid day. Steps have been taken to ensure that the CNG re-fuelling stations across the country will remain open round-the-clock seven days before and five days after the Eid. All the booths of toll plazas will be continued to keep traffic movement uninterrupted on highways during the Eid.

A great number of people leave Dhaka during the Eid vacation to enjoy the country’s biggest festival with family, but in previous years a lot of road accidents occurred. Moreover, a lot of people use waterways to go to their home, but those carry more passengers than their capacity which is also very risky for people’s live. At least 339 people were killed while 1,265 injured in 277 road accidents in 13 days during the Eid journeys in 2018, indicating that on an average 26 people were killed per day, according to Bangladesh Jatri Kalyan Samity. People expect hassle-free journeys on highways, rail and river routes. They don’t want the repetition of the past years.