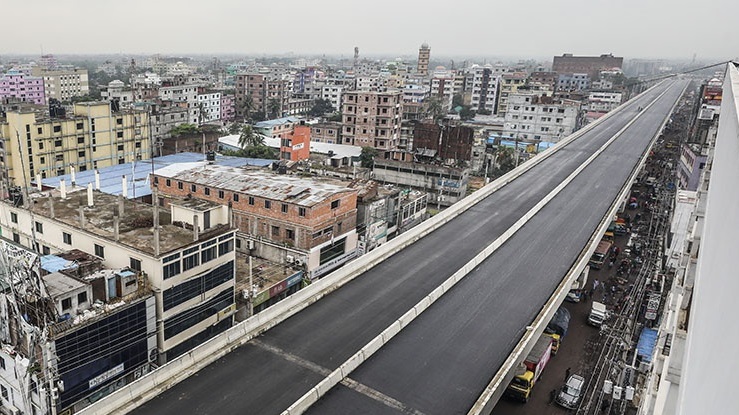 Honourable Prime Minister Sheikh Hasina only recently has inaugurated the second Meghna-Gumti bridges to the traffic through video conference. In fact, she has opened formally a number of bridges, flyovers and thoroughfares as a pre-scheduled part of her commitment-fulfilling move. The other ventures include Konabari-Chandra flyover, Kaliakoir, Deohata, Mirzapur underpass, Kadda-1 and Bimail bridges on the Joydevpur-Tangail-Chandra-Elenga highway. Earlier, the Prime Minister opened the second Kanchpur Bridge on the river Shitalakkhya on March 16 through video conference. Unquestionably, such a huge bundle of pro-people welfare packages prior to Eid have taken her deeper into the heart of the people, especially those who are expected to use these facilities.

In her exclusive speech on this special occasion, Prime Minister Sheikh Hasina has strongly asserted that through the commissioning of these infrastructural works, the socio-economic development of the country will get an extra mileage and the scopes for regional cooperation will be expanded further. She maintained that the world is now a global village and we can hardly afford to remain cut off from the rest of the globe. In fact, these infrastructural promotions coincided with Bangladesh’s ever-increasing volume of trade and commerce with the regional and neighbouring countries.

Unquestionably, Dhaka-Chattogram highway is one of the most important national highways of Bangladesh since this highway connects the capital city with the Bangladesh’s biggest sea port. The old bridges do practically have some limitations resulting in traffic congestion on the both approaches of the bridges standing on Meghna and Gumti rivers. For example, though the Gumti Bridge was designed to be built as double-carriage carrier but due to technical fault the bridge does not allow two five-tonners to cross the bridge simultaneously. Thousands of regular passengers as well as the vehicles using these bridges face serious time-consuming predicament on the bridge’s approaches, especially on rush occasions.

In line with this perspective, Bangladesh under the able leadership of Prime Minister has been working relentlessly giving topmost priority to building essential infrastructures. Our wise leader knows it all the more that highest expenditure on infrastructure necessarily means booming business. Other than these ones, infrastructures built during tenure of the Prime Minister Sheikh Hasina have already started yielding benefits in our domestic economy. Even the remotest corner of the country is now well connected by the feeder or channel roads stemming from the parent roads. The present government has upgraded the Dhaka-Chattogram highway to four lanes. A total of 1250 new road tracks have been constructed during the last five years of Hasina’s government.

Bangladesh has been already on the running track of materialising her ambitious dream of being connected with Asian Highway or Asian highway network. This network aims at connecting Asia, Europe and United Nations. On completion of this much talked about Asian Highway, the fruits of globalisation which in the truest terms refers to unimpeded access to global business by all. To put it in simple words, the motivating message of globalisation is to offer a borderless market for all. How will a borderless market be created without building necessary infrastructures, especially enhanced and expanded communication infrastructures?

Prime Minister Sheikh Hasina’s government soon after assuming the highest office of the state has evidently given the topmost priority as to how most effectively to be connected to the Asian Highway in the soonest possible time. Despite our limitations and financial constraints, Sheikh Hasina’s government has never ever moved an inch from the unflinching commitment to globalisation. It is more than miracles to see the new infrastructures becoming visible one after another.

Slowing down the speed of moving traffic categorically means pulling back the wheels of economy. The incredible surplus Bangladesh has achieved in economy owes a great deal to her ever expanding wide road network. It could hardly be possible once a bold and charismatic leader like Sheikh Hasina did not ever embark upon the project of infrastructural promotions. Mention may made here that with a view to infusing super speed to the movement of traffic, 25 flyovers as well as underpasses of utmost importance at the most vital points have already been built that will definitely help removing roadblocks and ensure safe quickest possible ever journey. A number of such infrastructures are underway.

It is all the more important to maintain all these costly infrastructures through our sustained and coordinated efforts. Surely, it is not only the responsibility of the concerned officials to monitor both the construction and maintenance works of these infrastructures funded by the people’s money. People have to remain always watchful so that the quality of construction works can be maintained so strictly with for the greatest interest for the people as well as the country. We have had a lot of bitter and also tragic experience in the past in which we have seen that newly-constructed roads develop cracks and the carpeting is badly damaged just after one month or even within a less period of time. We have also seen the pulling down the railings of a number of flyovers. We do not want to see these extremely undesirable scenarios to be repeated further in future.