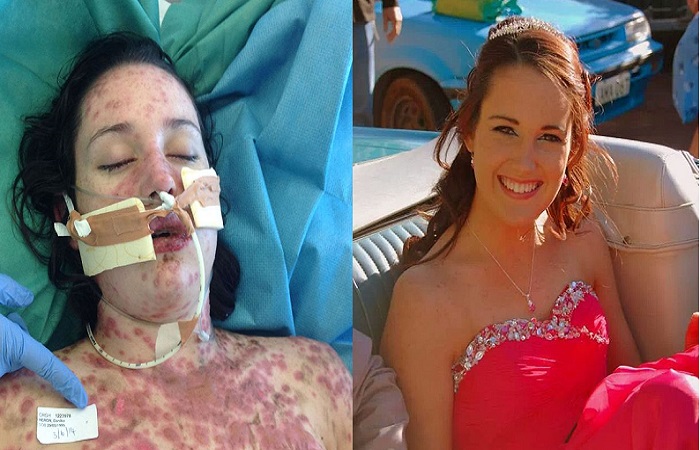 A teenager was left fighting for her life as her skin burned from the inside out due to a rare reaction to medication.

Danika Heron drifted in and out of consciousness, her skin blistered and fell off and she came close to death.

She had been prescribed medication for her epilepsy but a million-to-one toxic reaction left her feeling like she was being burned alive.

She was struck down by Stevens Johnson Syndrome (SJS) and TENS - Toxic Epidermal Necrolysis Syndrome - which caused severe burns to her organs and skin.

The rare reaction caused burns to over 50% of her body causing her skin to blister, scab and fall off.

Her lips swelled so much they burst and she was wrapped from head to toe in bandages.

Danika was diagnosed with Epilepsy when she was 18 and she was prescribed two different medications shortly before her 19th birthday.

It was on her 19th birthday in May when Danika from New South Wales, Australia, noticed her eyes and lips were swollen.

She developed a small rash on her chest which quickly spread over her entire body.

She went to a hospital in Sydney where doctors initially misdiagnosed her condition as Herpes and sent her home.

Over a period of four days, Danika's symptoms got progressively worse and her mum Carmen Heron took her to another hospital in New South Wales.

While there she was diagnosed with foot-and-mouth disease, measles and chicken pox before tests revealed she had SJS and she was rushed to a hospital in Sydney for treatment.

Mum Carmen said Danika's condition was so rare and severe it was touch-and-go as to whether she would make it through the night.

She said: "I just cried when I saw her, she was staying at her boyfriend's at the time and his mum brought her over as Danika works in Sydney.

She looked like death warmed up, the rash covered her body, her lips were huge and eyes and lips were weeping gunk.

"Over the next few days her condition got worse, she couldn't breath her neck had swollen so much she couldn't even drink.

"The rash was spreading and fast, she went through a box or more of tissues, dabbing her lips and eyes of gunk.

"It was heart breaking to see her like that.

"It came to a point when I thought I was losing her, I was begging her to fight it, willing her to pull though."

Danika spent almost a month in hospital as her entire body blistered, her mouth fused shut and she lost the top layer of her skin on her face, chest, back and arms.

She struggled to breath and had to be fed through a tube as the condition ravaged her body, burning her from the inside out causing her to vomit skin and blood.

Carmen said: "One day I was visiting her and she was struggling I was yelling 'you stay with us you fight this, Danika please don't go.'

"I went and grabbed a nurse, next thing I knew all these doctors were in there they put a camera down her throat and I ran out of the room hysterical.