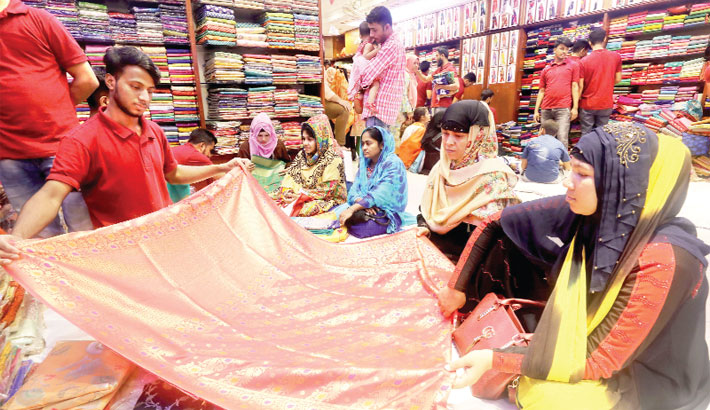 Buyers crowd to buy desired attires on the occasion of 'Eid-Ul-Fitr.' The photo was taken from ‘Terri Bazar’ in the city. — RABIN CHOWDHURY

As the Eid-ul-Fitr, the largest religious festival of the Muslims, is drawing nearer, shopping got momentum in the port city.

Shopkeepers hoped that they will be able to bag a good profit through selling their collected products to the shoppers before the Eid days.

Visiting different shopping centres from posh ones to footpath, huge number of shoppers, mostly women and children, were seen passing busy time to pick their desired attires for making the festival more enjoyable.

Shopkeepers are also struggling to tackle shoppers from morning to midnight everyday.

Like every year, the affluent section is thronging posh shopping malls while marginal people are rushing to hawker markets and footpaths to pick items after choice within budget.

Following tradition of the Eid, Punjabi tops the list of attires for men irrespective of ages while three-piece and saree remain as best choices for young girls and women respectively in the county.

Talking to shoppers, it was known that demand for cotton Punjabi, one of the main attires of men for celebrating any festival, is so high due to hot weather this year.

Along with the Punjabi, the demand for attires made of cotton for women is also high, the shopkeepers said.

However, some of the shopkeepers feared that some markets may witness low turnover as roads go under water following light to moderate rainfall.

Shopkeepers of Sanmar Ocean City, one of the posh shopping malls in the city, expressed grave concern as the road from GEC to Sholoshahar Gate No-2 gets inundated following light rainfall.

“Shoppers don’t want to visit the shopping mall wading the knee-deep to waist-deep water,” he said.

He said that they are selling the Punjabis at different prices ranging from Tk 2,000 to Tk 8,000.

The salesman, however, informed that the price depends on quality.

Alauddin, a salesman of 'Jannat Fabrics’, a shop on ground floor of the VIP Tower in the city’s Kazir Dewri area, said they are selling different kinds of three-piece with embroidery on cotton fabrics ranging from Tk 3,000 to Tk 8,000.

Md Saiful Islam, a salesman of ‘Shoe Bazar’ having huge collection of local and foreign shoes at Chittagong Shopping Complex, said they are getting good response from the shoppers this year compared to the previous occasions.

“Demand of Chinese shoes compared to the local ones is so high,” he said adding that presence of children and adolescents accompanied by their guardians at the market is remarkable.

He said they are selling shoes of different types at prices ranging from Tk 700 to Tk 2,500.

Alongside the collection of attires, women are passing busy time to pick best ornament matching with attires at the markets.

Meanwhile, Chattogram Metropolitan Police (CMP) has taken a good number of steps to ensure security and smooth movement of traffic centring the Ramadan and Eid like previous occasions.

Sufficient number of police, members of Rapid Action Battalion (Rab) and Armed Police Battalion (APBn) have been deployed in the city to ensure the security.

Besides, members of intelligence units in plainclothes have been patrolling to check eve teasing in the shopping malls.