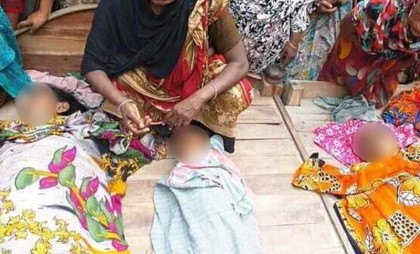 After poisoning two children, a mother committed suicide by taking poison at Sharsha upazila of Jashore.

The tragic incident took place at Chalitabaria Digha village of Kaiba union of the upazila at about 11:00 pm on Sunday,according to a report of Bengali daily.

As the news spread, a pall of gloom descended in the locality.

The deceased are identified as mother Hamida Khatun (35), daughter Sharifa Khatun (12) and son Sohan Sohel (5). The husband of the woman and father of the ill-fated children is Ibrahim, a poor tea seller.

Sukdev, sub-inspector (SI) and in-charge of Bagachra Police Investigation Centre said three bodies were recovered from the incident spot. The bodies will be sent to Jashore for autopsy report.

It is learnt that from police sources that the mother (Hamida) poisoned her children following an altercation with her in-laws and later she killed herself by swallowing poison.