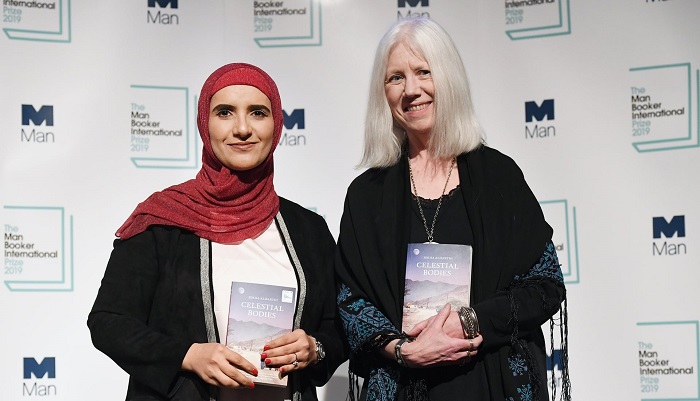 Jokha Alharthi, the first female Omani novelist to be translated into English, has won the Man Booker International prize for her novel Celestial Bodies.

Alharthi, the £50,000 award’s first winner to write in Arabic, shares the prize equally with her translator, American academic Marilyn Booth. Celestial Bodies is set in the Omani village of al-Awafi and follows the stories of three sisters: Mayya, who marries into a rich family after a heartbreak; Asma, who marries for duty; and Khawla, waiting for a man who has emigrated to Canada.

Chair of judges for the prize, historian Bettany Hughes said: “Through the different tentacles of people’s lives and loves and losses we come to learn about this society – all its degrees, from the very poorest of the slave families working there to those making money through the advent of a new wealth in Oman and Muscat. It starts in a room and ends in a world.

“We felt we were getting access to ideas and thoughts and experiences you aren’t normally given in English. It avoids every stereotype you might expect in its analysis of gender and race and social distinction and slavery. There are surprises throughout. We fell in love with it.”

Celestial Bodies was selected from an almost entirely female and independently published shortlist to win the award, which goes to the finest work of translated fiction from around the world. Alharthi saw off competition from writers including former winner Olga Tokarczuk, acclaimed French author Annie Ernaux and Colombia’s Juan Gabriel Vásquez.

Hughes said the judges had loved “the subtle artistry” of Alharthi’s novel. “It’s less flamboyant than some of the other books, there’s a kind of poetic cunning to it. It starts feeling like a domestic drama in a fascinating world, but with the layers of philosophy, psychology and poetry, you are drawn into the prose, through the relationship between the characters. It encouraged us to read in a slightly different way.”

In an interview after the novel was longlisted,Booth said she was delighted that the award was bringing Omani literature to the attention of a wider audience. But she added that Arabic fiction had a tendency to be seen as “a road map to the Arab world rather than first and foremost as art, as imaginative writing, pushing the boundaries of what can be thought and said”.

“What one really learns here ‘about the Arab world’ is that there are amazing fictionalists … throughout the region, not only in the better-known hubs of literary creation such as Egypt, Palestine, Lebanon, Morocco and many other places, but in a country that is less literarily mapped, like Oman,” said Booth. “And perhaps what one learns most is how alike they are in their dailiness, human exchange and emotions, and how societies that might appear so different are really so very much alike.”

Celestial Bodies is published by Inverness’s Sandstone Press and is its first venture into Arabic literature. Alharthi, who has written two other novels, two short-story collections and a children’s book, and has been translated into languages including German, Italian, Korean and Serbian, said she hoped Celestial Bodies would help “international readers discover that Oman has an active and talented writing community who live and work for their art”.

Before learning she had won, the author added: “They take on sacrifices and struggles and find joy in writing, or in art, much the same way as anywhere else. This is something the whole world has in common. Omanis, through their writing, invite others to look at Oman with an open mind and heart. No matter where you are, love, loss, friendship, pain and hope are the same feelings and humanity still has a lot of work to do to believe in this truth.”

Hughes was joined on the judging panel for the prize by writer, translator and chair of English PEN Maureen Freely, philosopher Angie Hobbs, novelist and satirist Elnathan John, and essayist and novelist Pankaj Mishra.