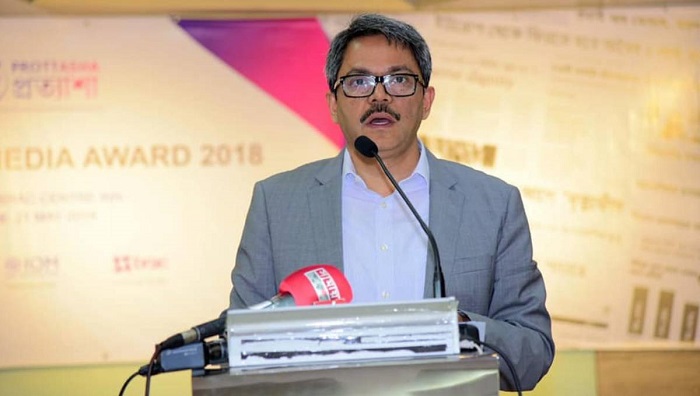 State Minister for Foreign Affairs M Shahriar Alam on Tuesday said the government will not tolerate any illegal practice in migration sector as it follows a zero-tolerance policy against such illicit thing.

“We don’t encourage illegal migration,” he said at Brac Migration Media Award 2018 event at Brac Centre Inn in the capital.

State Minister Shahriar said one success story of reaching Europe illegally can no way be an example for others to follow.

Thirty-nine Bangladeshis went missing after a boat capsized in the Mediterranean Sea off Tunisia coast on May 11 while attempting to reach Europe from Libya.

Fifteen Bangladesh nationals were rescued alive from the capsized boat and the body of another was recovered from the sea.  The survivors returned home from Tunisia early Tuesday.

The State Minister suggested that those who had gone to Libya with a dream of reaching Europe illegally should be brought under law.

Bangladesh imposed restrictions on sending Bangladeshis to Libya in 2014 considering volatile situation there amid civil wars there.

Shahriar said Bangladesh signed an agreement with the European Union (EU) and are repatriating and reintegrating the irregular migrants from Europe.

He has advised the journalists to investigate and identify the middlemen who are alluring the overseas jobseekers and finally leaving them in dangers.

EU acting Head of Cooperation in Bangladesh Doerte Bosse said the EU does not want to stop migration but it is against dangerous and unprotected migration.

She said the EU is working with International Organization for Migration (IOM) and Brac to return and reintegrate irregular Bangladeshi migrants, and create awareness against illegal migration.

Former vice chancellor of Dhaka University Prof Dr AAMS Arefin Siddique said the government should focus more on the welfare of migrants. “They should get more respect and dignity at home…their health and education should get greater priority,” he said.

This means it is important for the government to take up reintegration and rehabilitation programme for the abused returnee migrants, he said.

Brac recognised 13 journalists for their quality reporting last year. They include Owasim Uddin Bhuyan of New Age, Porimol Palma of The Daily Star, Arafat Ara of The Financial Express and Shafi Chowdhury of Dainik Jalalabad in Sylhet.

The awardees in TV news category are Mezbahul Islam of Independent, Meraz Hossain Gazi of Bangla Vision and Morshed Hasib Hasan of Channel 24 and Boni Amin of Independent Television.