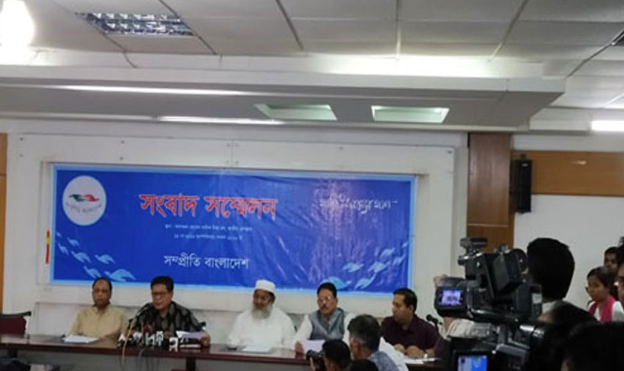 Sampriti Bangladesh, a platform working to promote secularism, at a press conference on Thursday denied any link of the organization with an advertisement on ‘identification of terrorists’ that was published in different national newspapers on May 12 and went viral on social media.

“We have noticed that an ill attempt was made to mislead the country’s innocent people by spreading false information about Sampriti Bangladesh over advertising on identification of terrorists in different newspapers recently,” Sampriti Bangladesh Convener Pijush Bandyopadhyay told a press conference at Jatiya Press Club here.

He added: “Sampriti Bangladesh has no links with the advertisement published in some national newspapers on May 12 last.”

Pijush said the confusion that was created centering the advertisement is unexpected and perplexing.

The convener said Sampriti Bangladesh, a social organization imbued with Liberation War spirit, is respectful to every religion.

He said the organization is working to build a beautiful Bangladesh where will have interfaith harmony and will not have any discrimination, repression and persecution.

“Prime Minister Sheikh Hasina has declared zero tolerance policy. Expressing solidarity with it, Sampriti Bangladesh with the cooperation from all quarters will remain active against all types of extremism, terrorism and communalism,” he added.