Pabna woman ‘set on fire by in-laws’ dies at DMCH 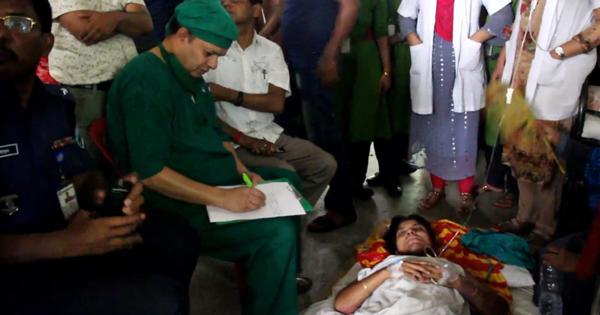 A woman, set on fire allegedly by her in-laws, died at the Dhaka Medical College Hospital on Tuesday night.

The deceased was identified as Saji Khatun, 32, wife of Surman Mandal of Talimnagar village in Bera upazila of Pabna.

According to the statement of a case filed by the woman’s father, Surman, a Malaysia expatriate, sent money to the bank account of her sister Shamela Khatun.

Shamela gave Saji Tk 3,000 for covering the family’s expenses, leading to frequent quarrel between her and her in-laws.

On May 9, Saji had an altercation with her mother, sister and brother in-laws, and at one stage, they poured kerosene on her and set her on fire.

Locals rescued her hearing her scream and took her to Pabna General Hospital. She was later shifted to DMCH.

Saji’s father Fajibor Rahman sued six people over the incident. Police have arrested Shamela but the others are on the run.