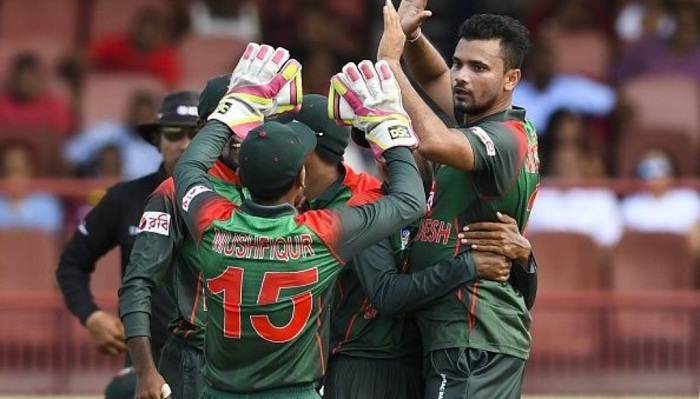 Bangladesh is eying to seal the final of tri-series with a match to go when they take on West Indies on Monday afternoon at the Malahide in Dublin.

The Caribbean side has already confirmed their place in final after their five-wicket win over hosts Ireland on Sunday. If the Tigers can beat West Indies today, they will also move into the final and Ireland, the third team of the tournament will be eliminated, making their last game against Bangladesh on May 15 a dead-rubber one.

Bangladesh earlier romped home registering a thumping eight-wicket victory over West Indies in their tri-series opener afterward their match against Ireland was washed out without a ball being bowled due to heavy rain in the double-league basis tournament.

West Indies won both of the game against Ireland. Even though the Caribbean side lost their first game to Bangladesh, the way they have gunned down Ireland’s huge total in the last game which can be alarming for the Tigers.

Ireland posted a very healthy total raising their hope of winning the match by amassing 327 runs but West Indies showed their batting muscle, overhauling the target with 13 balls to spare, with opener Sunil Ambris hammering 148.

Bangladesh would have little to worry if their top-order click once again. The top order’s performance was key in their eight-wicket victory over West Indies with Tamim Iqbal and Soumya Sarkar setting the platform upfront sharing 144 runs, the highest opening partnership for Bangladesh outside the home soil. Tamim struck 80 while Soumya made a fluent 68 ball-73.

The good thing for Bangladesh was that the form of Shakib Al Hasan, who on his first International match after recovering from the finger injury contributed in victory against West Indies with his superb all-rounder performance-a run-a-ball-61 and 1-33 with bowling.

Mushfiqur Rahim as usually gave the finishing touch to give Bangladesh a near perfect game. The only bother of spot for Bangladesh was the performance their pace spearhead Mustafizur Rahman who conceded 84 runs in 10 overs before taking two wickets.

However Bangladesh coach Steve Rhodes was unfazed by the performance of the Fizz, saying that he would turn the things around when it will matter most.

“I am not concerned. I really think he is a wonderful one-day bowler. Not long ago he is ranked in the top-five. We haven’t got many of our Bangladesh bowlers ranked among five in the world,” Rhodes said of Mustafizur.

“We do think we got very good bunch of players and they showed it against West Indies and that’s why some of the team would not take us lightly and may be a little bit worried or concerned about playing Bangladesh.”

Bangladesh however is set to field the same eleven that won the match against West Indies in the first-leg game.