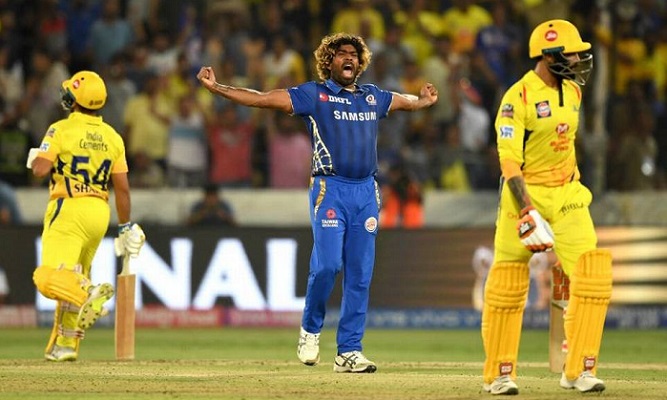 Mumbai Indians became IPL champions for the fourth time after defeating Chennai Super Kings by one run in a thrilling final, at Rajiv Gandhi International Cricket Stadium in Hyderabad on Sunday.

Kieron Pollard top-scored for the Mumbai side with his unbeaten 41-run knock while opener Quinton de Kock scored 29.

Chennai Super Kings dished out a disciplined bowling performance under pressure to restrict Mumbai Indians to 149 for eight in the IPL final in Hyderabad on Sunday.

After opting to bat, Mumbai ended up with a below-par total despite Kieron Pollard’s unbeaten 25-ball 41.

Deepak Chahar (3/26) was impressive once again and so was fellow pacer Shardul Thakur (2/37). The spinners, Harbhajan Singh (0/27) and Imran Tahir (2/23), too played a crucial role in limiting Mumbai Indians.

The Rohit Sharma-led side was dealing in sixes early on in their innings with the in-form de Kock collecting three sixes out of the four hit in the first three overs.

After a frugal first over, Chahar went for 20 runs in the following one with the South African wicket-keeper batsman going for his strokes on a true surface.

Thakur was not spared either as de Kock clobbered him over deep-midwicket for his fourth six before top-edging a short one to Dhoni in the same over.

All of a sudden, a promising start got converted into a wobbly one with Rohit getting caught behind off Chahar three balls later, leaving Mumbai at 45 for two in the sixth over. The Mumbai captain got deceived by a slower one but he still went for the drive, only to edge it to Dhoni.

It was a brilliant a comeback from Chahar after being hit for 20 in his previous over and credit to Dhoni for bringing him back into the attack from the other end and keeping the faith in the team’s most successful pacer this season.

With two new batsmen at the crease, the runs dried up before Ishan Kishan hit Dwayne Bravo for two boundaries to take Mumbai to 70 for two in 10 overs.

Surykumar played on leggie Tahir before the new batsman, Krunal Pandya, was dismissed with a good running catch from Thakur off his own bowling.

It got worse for Mumbai when Kishan tried deposit a Tahir googly out of the park and his mis-hit went into the safe hands of Suresh Raina at cover, leaving Mumbai at 105 for two in 15 overs.

Two of the biggest hitters in the game, Hardik Pandya and Kieron Pollard, were in the middle to put life into the innings and take their team to a fighting total.

CSK, who had done most things right up till, gave a breather to Pandya as Raina dropped a regulation catch at cover. The dangerous Pandya made his opponents pay smashing Thakur for two sixes in the same over before getting out.

Pollard at the other end did not get enough strike in the death overs. He faced all six balls in the final over and did not take the single off the first three deliveries after not being able to clear the boundary.

He got the much needed fours off the final two balls but it was not enough spoil a tidy last over by Bravo.

The attendance at the neutral venue was fitting for a final with more than 32,000 fans turning up.