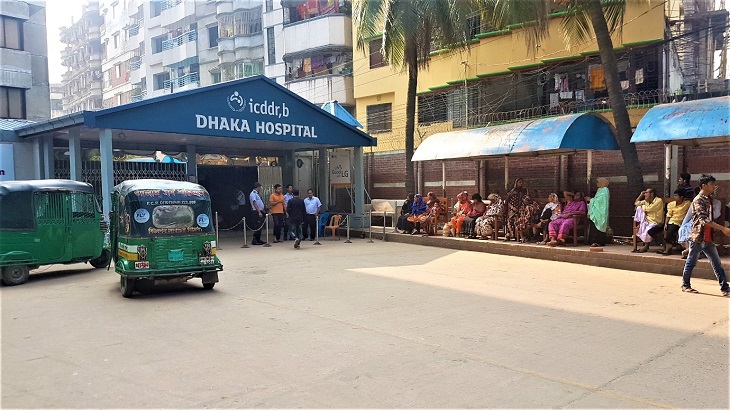 The ongoing heat wave has brought miseries to people who work outdoors. Many people are sufferings from various heat-related and water-borne diseases, including viral fever, diarrhoea, dehydration, nausea and heat exhaustion.

Scorching heat prevails across the country since April 14 with a three-day break for cyclone Fani, but the heat wave returned with more intensity slowing down normal life.

“The highest temperature of the season was recorded at 40 degrees Celsius in Rajshahi on April 29,” said AKM Nazmul Haque, a meteorologist of BMD, adding that the day and night temperature may remain nearly unchanged in the country.

The searing heat of the subtropical climate has affected vast swathes of the country, resulting in heat-related sickness sending people to hospitals while people down with various diseases like diarrhoea have sharply risen in both urban and rural areas.

Talking to the daily sun Azharul Islam, head of hospital and chief scientist, International Centre for Diarrhoeal Disease Research, Bangladesh (icddr,b) advised people to drink safe water and maintain hygiene in a bid to remain safe from diarrhea. He also asked people to consult doctors immediately in case of emergency.

Physicians suggest that people drink plenty of fluids and remain cautious about taking food to prevent heat-related ailment. They also suggested avoiding sunbeams and using proper protection like sunglass, umbrella and cap while going out in the heat of the day.

According to sources from different hospitals in the capital and other parts of the country, patients with heat-related diseases are flooding the hospitals because of hot and humid weather. During ongoing heat wave, icddr,b witnessed an increased number of diarrhoea patients more than that of normal time.

According to sources at different hospitals, diarrhoea took a serious turn in the capital and other parts of the country amid sweltering heat since the first week of April as around 1,000 people with diarrhoeal diseases were admitted to hospitals every day.

During a visit to icddr,b, this correspondent saw that doctors were struggling to tackle the situation while flow of patients was increasing, beds of diarrhoea patients overflowed and many patients spread to the hospital lobby, study area and corridors.

Over 22,563 diarrhoea-infected patients were admitted in the month of April in the hospitals across the country, according to a report of the Health Emergency Operations Centre and Control Room at the Directorate General of Health Services (DGHS).

According to hospital sources, different government and private hospitals in Dhaka and divisional cities, district level hospitals and upazila health complexes are getting huge patients infected with various diseases like diarrhoea, viral fever, heatstroke, and coughing during the heat wave.

According to Dhaka Shishu Hospital, it is witnessing increased number of patients with diarrhoea and viral fever for the last few weeks.

Hospital sources said that every day, about 1,500 children are being treated at the outpatient department only alongside over 600 patients in the indoor services.

He advised people not to bring children outdoors and to provide them with more water, watery food, seasonal fruits and juice.

As per Dhaka Medical College and Hospital (DMCH) sources, hot and humid weather has brought increased number of heat-related patients to the hospital’s emergency, outpatient and inpatient departments.

Patients, including children, with diarrhoea, dehydration, nausea and fever increased in recent days due to heat wave, sources added.

Talking to the daily sun, Dr Ranjan Kumar Dutta, assistant director of Pabna General Hospital said, “The hospital is flooded with various patients almost double the beds. A large number of patients suffering from various diseases are taking treatment in the hospital during ongoing heat wave.”

The mild to moderate heat wave also spread to cover some new regions, according to a new forecast of Met office.

The high temperature is aggravating the plight of the commoners, including animals and wildlife, as no significant rain was witnessed in the country.

Normal life is being hampered severely as rigorous heat wave is sweeping across the capital and elsewhere in the country for days together.

However, the highest temperature in the country’s history was 45.1 degrees Celsius that was recorded on May 18, 1972.