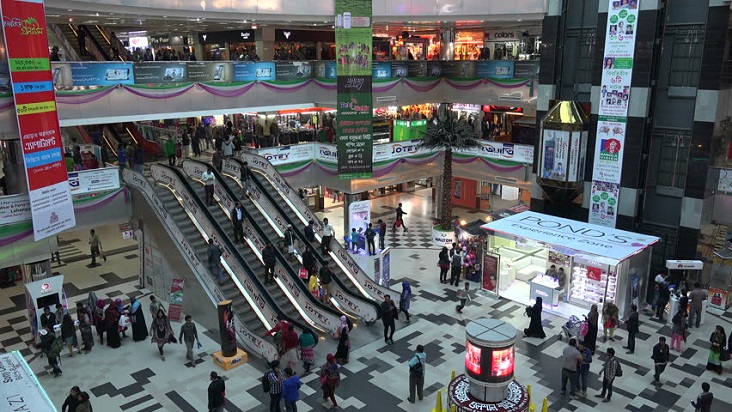 A large number of law enforcers, both in uniform and plain clothes, have been deployed in and around shopping malls and crowded places like markets and bus, launch and railway stations in the capital to ensure security and smooth Eid shopping during Ramadan.

Law enforcers are now keeping a close watch on the crowded places to maintain law and order, said a senior official of the Detective Branch (DB) of police.

Sources said many teams of plain-clothes police and DB police in the guise of customers have already taken positions at the crowed places to catch criminals.

With a view to freeing the highway from all kinds of crimes and the nagging traffic congestion, a large number of law enforcers are also working hard, police sources said.

In the wake of repeated incidents of criminal activities like mugging, carjacking and extortion, Dhaka Metropolitan Police (DMP) has deployed a huge number of law enforcers comprising police and Detective Branch (DB) police at different strategic points, including over 200 shopping malls, bus terminals, launch and railway stations, in the capital, police sources said.

“Such a huge number of law enforcers, both in uniform and plain-clothes, have been deployed at different strategic points, including shopping malls, bus terminals, railway station and launch terminal, to keep the capital free from all kinds of criminal activities like mugging and extortion and the nagging traffic congestion,” the DC said.

A huge number of law enforcers are now working in the capital to curb criminal activities, including mugging, hijacking, extortion and doping by aggyan-party men, and tackle nagging traffic congestion, police sources said.

Abul Kuddus, officer-in-charge (OC) of Shabujbagh Police Station, said, “As part of extra security measures, I have already deployed 10 teams, both in uniform and plain clothes, at different key points in my areas, including shopping malls, to curb criminal activities.”

“We have also intensified regular patrolling in our areas to maintain law and order and ease the traffic, the OC added.

City commuters more or less are falling prey to different organised gangs of criminals every day and losing cash money, gold ornaments and other valuables, many alleged.

Armed hoodlums lie in wait at different strategic points, including commercial areas, for their target.

Taking advantage of the situation, the gangsters swoop on their target and loot their valuables.

To make their target a success, the gangsters even do not hesitate to injure or kill the victims.

“Organised muggers, mostly three to four in a group, move together and loot valuables from commuters,” an intelligence official said.