New Era of Bangladesh Army under a Dynamic Skipper 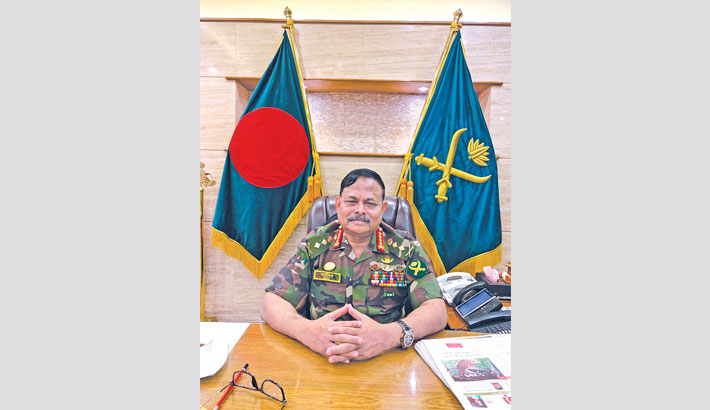 A new phase of the Bangladesh army has started as firstling in its history since its inception from the days of those tumultuous times during the glorious Liberation War of 1971. Bangladesh for the first time has appointed an indigenous thoroughbred regular commissioned officer from Bangladesh’s epic military academy – a Bhatiary alumnus as its Chief of Army Staff in the month of June 2018. A CAS is picked up out of thousands and a soldier with highest professional excellence that is entrusted with intrinsic sacred responsibility of steering the force in entirety in the quest of finer perfection.

If we retrospect, we find that officers with exceptional dynamism and charisma were selected as CAS. Critics might argue that at the incipient age there were lack of experience noticeable amongst few of them and lacuna in their action but surely all of them left behind their marks more or less in various fields and thus lifted the army to the present stature.

However, every individual had their own style of command - some of them emphasised more on training, some had their principal effort on welfare, some gave more importance to infrastructural development and so forth. It can be very logically conjectured that Bangladesh Army had been longing for a professional who being ascended to the helm of the entire affair would ensure an importance in all facets and entire gamut of development of the force.

Appointment of General Aziz is definitely an excellent piece of news for the soldiers and officers who as the General has always been perceived as an approachable and affable personality by all ranks and files. The General has climbed through the slippery slopes of soldiering from day one; undergoing a precarious 104 weeks of gruelling training regime at the Bangladesh Military Academy and then next 36 years of soldiering from the front line as a field commander. The General has earned profound prowess and dexterity serving in multidimensional capacity and thus showcased himself as a loadstar/benchmark for the next generation.  It, in essence, is the beginning of a new episode in the country.

The Bangladesh Army began its journey with the remnants of officers and soldiers of the British colonial era and Pakistan Army. The inception of The Bangladesh Army leapfrogged to this pinnacle during the Liberation War which symbolises people’s struggle in the bloodiest of all wars of Bangladesh. Since then, the army was commanded by a total of 14 Chiefs of Army Staffs. But this is the beginning of long-commissioned officers of the Bangladesh Army to take over the helm of the affairs of this resplendent army; one of the finest institutions of Bangladesh.

The army is currently standing very tall in the world scene with pride and professionalism. Contributing the highest number of its members serving with the United Nation’s peace keeping forces all over the world in all the nooks and corners of the globe where they are called for with extremely praised participators. For a relatively a newly born army, these accolades are extraordinarily high which enhance the image of Bangladesh beyond continents all over and keep the banner of glory flying aloft far and wide across the fringe of its geographic boundary.

With the strength of 160,000 combatant and another 40,000 non-combatants, the army in Bangladesh is perhaps one of the largest employers in the country. The army had been through lots of ups and downs and scarcity of resources due to economic constraints as well as other kinds of issues engulfing the reputation in the past; which was established by the people who were in the controlling seats to serve their own ulterior motives mostly to serve their parochial selfish interest and hunger for power. A vicious nexus with the disgruntled politicians, they have extensively made use of the army in the past.

Nevertheless, the army has bounced back and repudiated all those misnomers with its extremely exemplary professionalism in peace and operations which has been engrained in their psyche with the eddy of time and with matured statesmanship from the top. It remained as the unflinching bastion to uphold the independence. The role of the Bangladesh Army evinced during multi-faced natural and man-made calamities was perhaps the best of all time. It is viewed by the nation as the pillar of strength, unity and source of inspiration in all of those tumultuous moments.

Unlike western world, when army personnel are left to their own devices after the finish of their time in the army, Bangladesh army symbolises itself as one of the best benevolent organisations in the country. It supplies the best care for its ex personnel - be for officers, junior commissioned officers, non-commissioned officers, other ranks both combatant and non-combatant. It is simply a gargantuan task to accomplish.

Since the appointment of General Aziz Ahmed as the new Chief of Army Staff on the 25th of June 2018, the momentum of reforms and welfare have surpassed all previous records in the past 48 years of the army’s history. As if the army is moving in the highest throttle of its speed with precision, passion and professionalism to say the least. His works speak louder than his words. The army in its lifetime never came across so many changes in these 11 months of his command. The Chief has undertaken a massive overhaul of the age-old system. Under his dynamic leadership, the army is seeing an ‘ocean of change’. His passion and his professionalism blended with his long 37 years of experience and, most importantly, the farsightedness mingled with his intrinsic ability of leading his men from the front has enabled him to see the real issues that concern a normal soldier in his day to day life. Bear in mind the General started his career after his commission doing almost all the duties, responsibilities of each ranks during his gruelling 8 weeks of regimentation and thereof his long professional life he has always been in touch with his men in the barracks as a General Staff Officer Grade III as a captain, a Brigade Major on an infantry brigade as Major commanding a few field regiments of artillery units as a Lt Colonel, a sector commander in the Border security forces, as a Brigadier General commanding two Brigades among them an independent formation of an Air Defence Brigade commander protecting the skies of the country from all sorts of air threats and thereafter the General served as the General Officer Commanding of an Infantry Division, the next came the biggest of all challenges were bestowed upon him to reorganise, modernise the erstwhile Bangladesh Rifles to Border Guards of Bangladesh; which was one of the most adventurous and herculean tasks of all. It was indeed a challenging job to reorganise and reshape a force which became so disarray after the debacle of 2009.

From there the General was successfully appointed as the QMG and GOC ARTDOC, an outfit responsible to make the force battle-worthy through sound and pragmatic training. These multi-dimensional command and staff appointments have enriched the General’s professional acumen, resolve and seasoned him hardened enough to take the baton of the Bangladesh Army for the coveted post of Chief of Army Staff, an epitome of appointment for any soldier’s career, Sixth Four Star General in the Country’s history.

‘A soldiers’ General’ famously coined by the men in their barracks of all army cantonments. The General is the second Chief of Army Staff who was the Director General for Border Guards of Bangladesh, the biggest paramilitary forces of the country. His appointment as the Director General came in the aftermath of the calamitous disturbances during the last phases of the erstwhile Bangladesh Rifles – the task assigned to him was probably the biggest of all responsibilities following those tremulous period when he took the helm to rename – reorganise – restructure and re-brand the force which guards a total of 4,430 KM of borders with two neighbouring states. It’s the fourth largest border mileage in the world. Mammoth 50,000 manpower with 63 battalions (which is in excess of 5 regular Infantry divisions’ equivalent in strength) with more than 1,000 Border Out Posts stretching from Banglabandha (Panchagarh) in the North to Shah Parir Dwip Cape (Teknaf) in the south, from Akhainthong (Bandarban) in the east to Mankasha(Chapai Nawabganj) in the West. The General commanded the BGB with his iron fist and inter alia the normal administrative chores the period of his command will be remembered by the generations of the border guards for his reforms, leadership, welfare for both serving, retired, martyrs of the liberation war and freedom fighters creating a welfare fund, establishing a full-fledged commercial schedule bank.

During his tenure as a sector commander and as well as the Director General of BGB, the General was perceived as the public face of the mutiny trial. Under his watch everyone worked extremely hard to bring all the perpetrators of the mutiny to book. His perseverance of rounding up the culprits of the mutiny and ensuring the gathering of all necessary witnesses and evidences to the Honourable Court led to the judgement and all known criminals and culprits were given their deserving punishment and he also scrutinised through all the evidences, inquiries and witnesses meticulously so that no one is punished unjustifiably and not a single innocent is punished. This has set an example in the judicial history of Bangladesh. His patience, perseverance, impetus has made sure no miscarriage of justice happens during these colossal trials.

Out of 14 of his predecessors, hardly anyone of the ex-chiefs can match his stature in terms of command experiences. It was during the present chief’s time when the country saw a peaceful election and the smooth electoral process of upholding peoples’ democratic rights. Which is beyond any doubt and it was a gigantic task to comply with. Having 100 million voters to cast their votes, voting in excess of 40,000 polling stations with circa half million polling booths spread over 55,000 square miles wasn’t an easy task to accomplish all in one day.

The incumbent chief has brought multi-dimensional developments for the army namely the renovation, re organising and increasing the war fighting capabilities, where he has yet again proved his prowess of orchestrating military strategy with grand strategy of the county. Arranging an avenue for our troop’s employment in Kingdom of Saudi Arabia, facilities for home building loans, subsidised housing programme for the soldiers, enhancing the medical and treatment facilities for the officers and soldiers’ parents, offering car loans for officers, expediting Jolshiri housing project programme in first track plus he now plans to build 3,000 flats for officers in Jolshiri with arrangements to buy another 33 acres of lands soon.

I guess, these all attributes of welfare, camaraderie, professionalism, fellow feeling, passion, care and above all spirit de corpse have been inculcated and embedded in him since his humble upbringing and his period of growing up as an adolescent following the War of Liberation, in which his family’s enormous contribution helped him understand the importance of having those magnanimous traits. As a student in school, he had the rare opportunity to see the dynamic leadership of our beloved Father of the Nation; how he was trying to steer the country from a war-torn dilapidated landscape to a thriving Bangladesh – one of his long-cherished dreams.

It is for the first time in the history of Bangladesh that a prudent, sagacious and discreet Chief of Army staff has been chosen by the country who is down to earth, easy going and open to all. A new genre of leadership adorned upon him by none other than our Honourable Prime Minister and we wish and pray that our new skipper of the army will herald a new era for the Bangladesh Army.

Writer is a historian, writer and public speaker based in the United Kingdom.