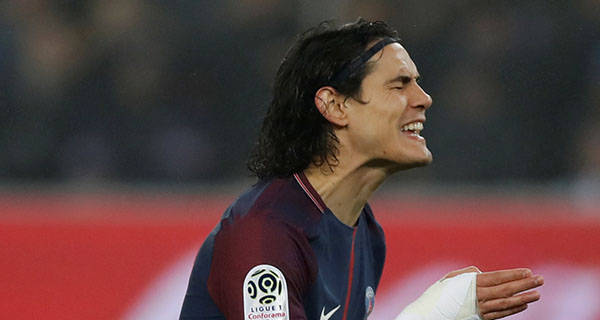 Paris Saint-Germain's dismal recent run in Ligue 1 continued on Saturday as Edinson Cavani missed a stoppage time penalty for the French champions in a scrappy 1-1 home draw with Nice.

The Uruguayan shot weakly at Nice stopper Walter Benitez nearly five minutes after Neymar, who scored PSG's leveller from the spot 30 minutes earlier, was judged via VAR to have been brought down by Dante.

PSG retained the league title two weeks ago and are 17 points ahead of second-placed Lille but they have now won just one of their last six league games as their season continues to disappoint in the aftermath of their nightmare Champions League defeat to Manchester United in March.

They were beaten 3-2 at Montpellier midweek after throwing away a two-goal lead to lose on penalties the French Cup final last weekend, after which star striker Kylian Mbappe was hit with a three-match ban for a rash tackle on Rennes' Damien Da Silva.

Not even Neymar -- who is awaiting sanctions after hitting a Rennes fan in the aftermath of the cup defeat -- bagging his first league goal since January was enough to rouse the hosts from their slumber.

The Brazilian struck from the spot on the hour mark in front of a not-full Parc des Princes to level Ignatius Ganago's stunning volleyed opener just after half-time, but Thomas Tuchel's side were lacklustre throughout and couldn't grab the winner.

Patrick Vieira's Nice, who are down in seventh and seven points away from the Europa League place, had a much simpler chance to double their lead and pile the pain on PSG 12 minutes later after Ganago's strike, but Alan Saint-Maximin could only watch in horror as his shot from the bar after being served an open goal by the dynamic Youcef Atal.

They were duly punished seconds later by Neymar, who coolly strode up to score his spot-kick after Angel Di Maria was hacked down by Patrick Burner.

PSG pushed for a winner without creating much, and they were handed a golden opportunity to snatch an undeserved winner when referee Frank Schneider pointed to the spot, booking a distraught Dante in the process.

However Cavani, in his first start since February, wasn't up to the task and the hosts had to make do with an underwhelming point.