The women desperate to leave Nepal 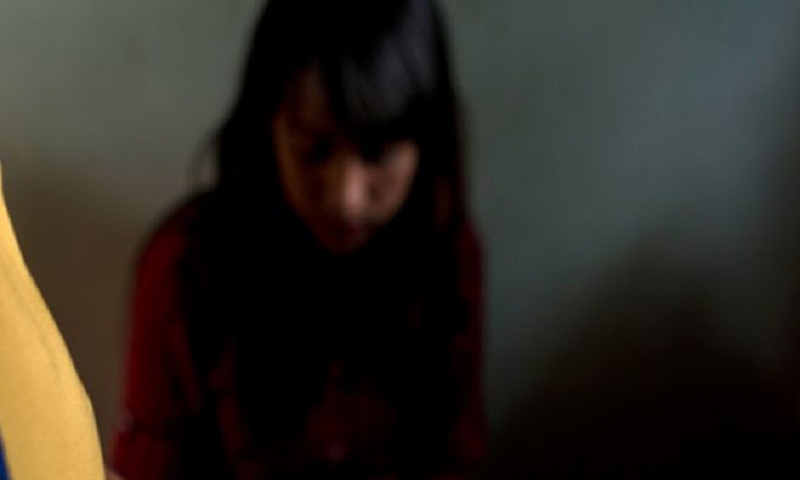 The trafficking of Nepali women increased rapidly after the 2015 earthquake, and social media has been making the traffickers' job even easier, discovers Vicky Spratt.

The sound of laughter and singing echoes around the building, mixing with the beeping horns of the traffic outside.

The walls are draped with vibrant orange, turquoise and pink silk scarves all made as a form of therapy by the survivors who live here.

This is a safe house in Kathmandu for women who were trafficked into prostitution and are now being supported as they try to return to their normal lives.

Just over a year ago a stranger added her on Facebook, she accepted, and soon he slid into her DMs and they began exchanging private, direct messages online. The stranger turned out to be an agent for the traffickers.

As I wait for Chandani I stare out of the window and watch swirls of yellow dust mix with rain. The Himalayas - which run along the northern edge of the green valley that cradles Nepal's capital - are hidden behind cloud and fog.

Sujata, my translator, says that the dust is from construction work. "They're rebuilding the city," she explains, after much of Kathmandu was destroyed by the 2015 earthquake. Natural disasters, it turns out, are good for the construction industry... and for people-traffickers.

A modern slave trade in trafficked labour was already prospering here, but the earthquake left people more vulnerable, separated from their families and in need of work.

The number of victims has risen by 500% according to India's border force.

Charimaya Tamang, who helps run the safe house, tells me that in the 1990s she was trafficked herself. She was drugged, abducted and then taken to a brothel in India. Now technology has injected new lifeblood into the business, she says.

"Social media has really helped the agents - nowadays they don't have to go to rural villages to find girls," she tells me. "They can just search for potential targets online and send them a message with one click."

The door opens and Chandani greets me with a huge hug. Her story, she says, began with an innocuous friend request.

"There was a man who used to chat with my sister on Facebook," she explains.

"He added me and started messaging. He told me he could get me a well-paid job in Iraq. I never met him, but one day he sent someone to hand over a visa and a passport."

Chandani's family lost their home in the earthquake. When this trafficker messaged her, she was living in a temporary shelter. The agent had already been talking to her sister for months, in effect grooming them both. Then, in the continuing chaos in the aftermath of disaster, he seized his moment.

After the delivery of a passport, the agent told Chandani that a job was ready for her as a housekeeper in Iraq. He arranged for her to be escorted to Delhi by a man he said was his brother.

Once there, instead of boarding a flight to the Middle East as promised, she was locked in a hotel room with 18 other women for several weeks.

Chandani looks away when I press her about the details. I notice her eyes glisten.

What was going through her mind in that room, I ask? She tells me she knew she was "about to be sold" because tales of trafficking are everywhere in Nepal. Women grow up being warned not to let this happen to them.

It's a known risk but one she had taken willingly in the hope of changing her and her family's fortunes.

Leaving the country for work is not unusual in Nepal, but for young women the pursuit of new lives and financial freedom can be risky. In fact, it's so dangerous that a controversial law says women under 30 aren't technically allowed to migrate without the permission of a guardian - a parent or husband.

Like many young women in rural Nepal, Chandani had long been frustrated by her lack of choices before opportunity arrived in her inbox.

"Everyone in my family works on the farm," she tells me. "It is hard, I don't enjoy it and I can't make enough money."

She doesn't want to get married either.

"I don't see many women doing well in married life," she laughs, "but I see many men cheating."

Sujata smiles as she translates, and I can't help but laugh too - even though I'd just been struggling to hold back tears.

Chandani tells me she resents the idea that she needs a man to get ahead in life. Before I leave the safe house, she looks around and confides in me that she may still try her luck.

"I will go anywhere I can make good money," she says defiantly. "I will try to go abroad again."

Samita Bajracharya is a 12-year-old Nepalese girl who lives with her family, studies hard, and enjoys playing a Nepali version of the lute. But until recently she was also worshipped by people who believed she was a reincarnated goddess.