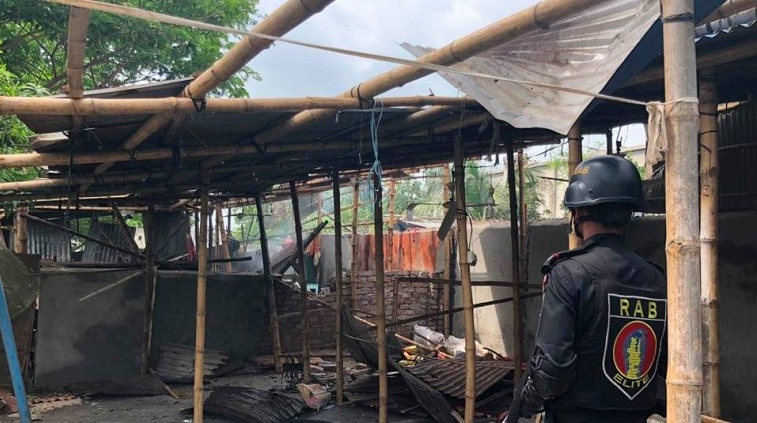 The raid at the suspected Islamist extremist hideout at Bosila area in Mohammadpur of the capital on Monday that killed at least two militants; in a retaliatory move, Islamic State group also claimed to have wounded three police in a bombing.

Police commandos were met with gunfire on arriving at a house in the capital’s Bosila neighborhood after midnight on Monday, Lt. Col. Ashique Billah told AFP, according to a report run by The Japan Times.

This was followed by an explosion that demolished the walls of the house, the Rapid Action Battalion commander added.

Rita Katz, an analyst on IS movements, in a tweet on early Tuesday wrote, “IS claims bombing on Bengali Police in Dhaka in first attack in Bangladesh in 2 years.”

Bangladesh, however, launched a crackdown on Islamist extremism after attacks in July 2016, when IS-inspired militants stormed a Dhaka cafe killing 22 people, including 18 foreigners.

“Our bomb disposal unit found the body parts of two militants in the house. The explosion was so powerful that it tore apart the bodies and shook the whole area,” Japan Times quoted Billah.

Four other people were detained, including a caretaker and imam from a nearby mosque, the officer added.

Separately, in their first claimed attack in Bangladesh in more than two years, IS jihadis said they “detonated an explosive device” on a group of police, the SITE Intelligence Group reported.

According to the U.S.-based group which monitors jihadi activity, the brief IS statement said the blast wounded three police on a road to Dhaka’s Gulistan market.

In March 2017, IS had said it carried out explosions in the northeastern city of Sylhet.

Police said six people died in those blasts as commandos stormed an Islamist hideout. The government at the time rejected IS’s claim and blamed a banned homegrown organization.

Since the 2016 attacks, security forces have staged nationwide raids in which, they say, nearly 100 members of two extremist Islamist groups have been killed. Hundreds of suspects have been detained.

The South Asian nation has boosted security since April 21 Easter Sunday bombings in Sri Lanka, which killed 253 and were carried out by jihadis affiliated to IS.

With inputs from The Japan Times