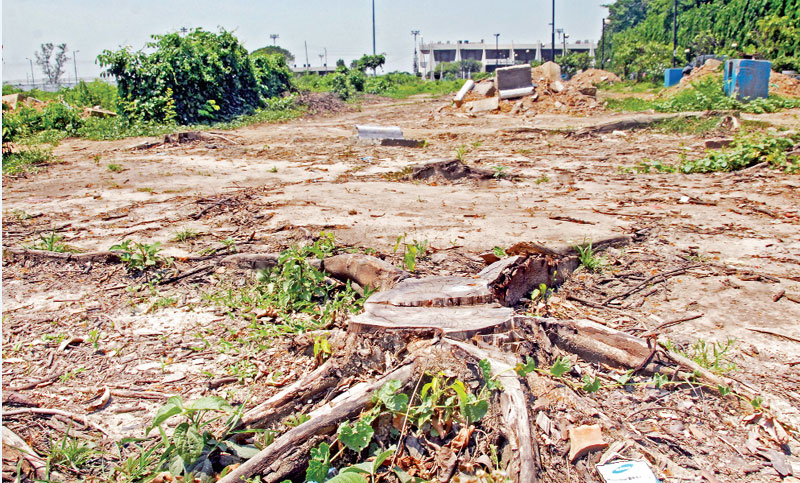 Many big trees have been cut down near Hazrat Shahjalal International Airport in the capital due to expansion work of the airport. The photo was taken on Sunday. – Kamrul Islam Ratan

A large number of big trees on the road from the north end of Nikunja residential area to the VVIP Complex of Hazrat Shahjalal International Airport (HSIA) have been felled, giving the area a deserted look.

Sources said the trees have been cut to facilitate the construction of a third terminal for the airport.

Local people said huge dust is being generated, particularly in daytime, in the area because of the indiscriminate felling of trees, seriously affecting the residents in Nikunja and adjacent areas, pedestrians and commuters.

They said dust covers the entire area making it hard for anyone to breathe or see ahead.

Hassan Chowdhury, a commuter in the area, said: “We would once inhale fresh air while going through this road, but now we have to wear masks for protection from dust.”

“The greenery in the area is shrinking day by day. The authorities need to be aware of the matter,” he added.

Government officials blame two Japanese consortiums working on the terminal project for the mindless felling of trees though, sources said, the authorities are yet to give formal work order for the construction.

Environmentalists are critical of the tree elimination. They say development work is done keeping trees untouched in most of the developed countries.

“If necessary, they change the design of the construction project. But they never destroy old trees. There was no reason to cut so many trees,” said a green activist.

Several sources, however, said work order for the construction is yet to be given to the contractors.

Green activists criticised the indiscriminate tree felling in the name of development work.

“Had the authorities concerned been conscious of the impact of tree felling on ecology, the development work could have been done without felling trees,” said Bangladesh Poribesh Andolon (BAPA) General Secretary Dr MA Matin.

Poribesh Bachao Andolon (POBA) Chairman Abu Naser Khan said that in Bangladesh trees are cut down for development work and after completing the work new trees are planted.

“This is not the right practice.”

“Old trees in certain areas maintain the ecological balance there. So, the authorities need to consider carrying out development work cutting the minimum number of trees,” he added.

Sumon, a regular domestic air passenger, said: “Once we used to wait under the trees adjacent to the airport until our near one’s flight takes off, but now there is hardly any tree to stand under.”

A car driver who regularly carries passengers from the airport said: “It has become tough to wait for long in the extreme heat. Once there were trees. We used to stand or sit under the shed of the trees. But now there is nothing.”

“We don’t know if the contractors take the permission or not,” he said.

Land allocation and clearing garbage from the demarcated area and construction of boundary are going on, said a CAAB source.

Project Director AKM Maksudul Islam could not be contacted for his version on the issue as he was in China at the time of filing of this report.

Environment, Forest and Climate Change Minister Md Shahab Uddin told this correspondent that he is unaware of the tree felling and that he will look into it.

“I’m now going to the airport. I’ll look into the matter and take necessary steps,” he said.

Asked about the ecological balance, she replied that “From our side we already submitted a ‘Clean Air Act’ to the government where we stated that for forestation local government has to count per capita of the city. For high-rise buildings, roof top gardening is essential.”