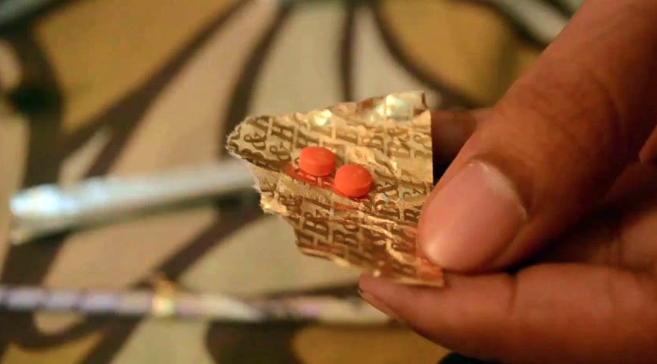 Hundreds of thousands of people in Bangladesh have become hooked on yaba - a mixture of methamphetamine and caffeine sold as cheap red or pink pills. The official response has been harsh, with hundreds of people killed in alleged incidents of "crossfire".

"I was awake for seven, eight, even 10 days at a time. I was taking yaba in the morning, the afternoon, in the evening, again late at night, and then working all night and not going to bed."

Mohammed was an addict. After staying awake for so long, he would crash.

"I would black out. I totally went down. After two or three days I would wake, have food, and go to bed again. But if I had any yaba, I would take it - if you have a single pill left, you will take it."

"Our import business was with Japan so we had to work at night because of the time difference. One of my colleagues told me about yaba. He said that if I take it, it will help me stay awake, be more energetic and to work hard in the morning and late at night."

At first, Mohammed experienced the benefits his colleague described. But they were short-lived. Mohammed began behaving erratically, and came close to breakdown.

"In the early stages of using yaba it has a lot of positive effects. Everything is enhanced with yaba," says Dr Ashique Selim, a consultant psychiatrist specialising in addiction.

"You become more sociable… You enjoy music, cigarettes and sex more. In Bangladesh there's a very unhealthy association between yaba and sex - you're awake longer, you've got more energy, you feel more confident. If you stop using yaba, there are no withdrawal symptoms, it's not like alcohol or heroin. But it's the effects of yaba that are really addictive. It's a very, very dangerous drug."

Yaba first appeared in Bangladesh in 2002 and its use, and abuse, has steadily risen since then. Manufactured illicitly in industrial quantities in Myanmar, it is smuggled into Bangladesh in the far south-east of the country, where the border partly follows the River Naf.

It was across this river that hundreds of thousands of desperate Rohingya refugees fled into Bangladesh in 2017, to escape from the Burmese military. Now nearly a million destitute refugees live in makeshift camps in the region and dealers have succeeded in turning some of them into mules - often women, who smuggle packages of pills inside their vaginas.

Experts believe the dealers see an unmissable business opportunity. At a time of rapid growth - Bangladesh has one of the world's fastest growing economies - traffickers are dumping huge quantities of yaba, and selling it cheaply to create a captive market. Anecdotally, it seems its use is becoming more prevalent among go-getters riding the economic boom.

"I was totally dependent on it," remembers Mohammed.

His wife, Nusrat, who was caring for a new-born baby at the time, says his behaviour became more and more unpredictable.

"He used to come home and blame me for everything regarding food, friends, my job… This was very unusual, and it's not actually like him," she recalls.

After she found some yaba tablets in the house, she tackled Mohammed about them.

"He screamed at me. I tried to convince him to get some treatment, but he was still denying it. He said, 'You don't trust me, you want to go away with someone else, you want to be apart from me.' I had a tough time. And at the same time I knew he could do anything - he could even kill us."

According to Dhaka psychiatrist Ashique Selim, yaba has filled a unique role in Bangladesh, a nation where alcohol is not freely available, and drinking is often frowned upon.

"I had a gentleman who came to me who'd led a pretty straight life. His parents were very conservative. So when his friends would go out and have a few beers, he wouldn't do that because he didn't want to come home smelling of drink. Then in his 30s he came across yaba. So there were no visual changes in the way he looked, and there was no smell. And when he was having small doses there was no effect the day after."

But yaba users struggle to keep their habit purely recreational. And it is the drug's widespread availability, and the chaos it is causing, that provoked the Bangladeshi government to ratchet up the penalties for yaba possession, and to declare "zero tolerance" - a policy that some claim involves summary execution by law enforcement agencies.

"I was coming back from the mosque, when I saw a lot of policemen in front of my gate," remembers Abdur Rahman, who lives in Teknaf, the town at the heart of the yaba trade in the south-eastern district of Cox's Bazar.

"They entered my house, and found my son, Abul Kalam in the bathroom. They grabbed him and handcuffed him. I said, 'Please release him, what has he done?' The policeman told me, 'If you talk too much, we're going to shoot you.'"

Abul Kalam had recently served a prison sentence for human trafficking, not drugs. He was held in the police station for five days before his father got some very bad news.