Prime Minister urges all to stay away from terrorism 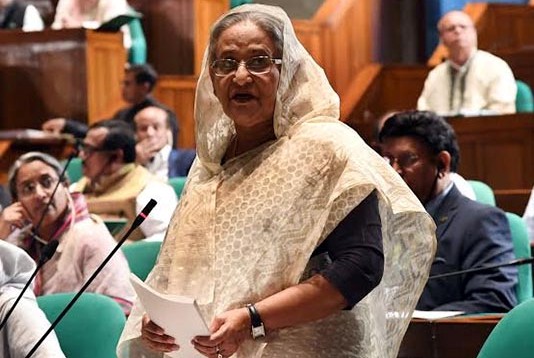 Prime Minister Sheikh Hasina on Wednesday called upon all to keep them away from the terrorism and militancy.

“I expect that no man can engage him in such heinous acts,” she said referring to the recent deadly attacks in New Zealand and Sri Lanka.

She was replying to a query from the treasury bench lawmaker M Shahiduzzaman Sarker from Naogaon -2 constituency.

The premier also requested all to inform the intelligence agencies about any information leading to militant or terrorist attacks.

She mentioned that her government had earlier checked such heinous acts with iron hands, saying, “We don’t want to be happened such attacks in any other places in the world.”

Terrorism and militancy can’t bring any welfare for the human being, she opined.

The people who are carrying out terrorist attacks in the name of Islam, they basically dishonor it as all of the religions speak for peace.

Sheikh Hasina, also Leader of the House, said an eight year-old Zayan Chowdhury, grandson of Awami League Presidium Member and cousin (fufato bhai) of the premier, Sheikh Fazlul Karim Selim, was the victim of the bomb attacks in Sri Lanka.

His (Jayan’s) father, who suffered critical injuries in the attack, has been fighting for life and looking for his son, she continued.

Referring to the killing of a Feni madrasha student Nusrat Jahan Rafi after setting her on fire by pouring kerosin, she said, “Such inhuman acts truly bring no welfare for the mankind.”