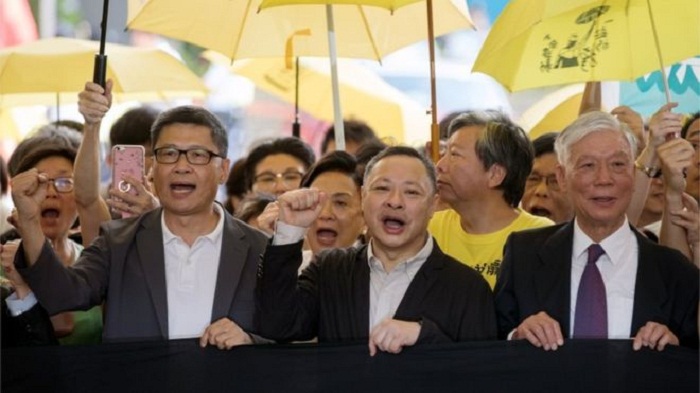 Four others received suspended sentences on Wednesday, while one had their sentencing deferred until June.

The nine activists were found guilty earlier this month over their involvement in the "Umbrella Movement".

Demonstrators paralysed Hong Kong in 2014 when they demanded the right for the territory to pick its leaders.

Judge Johnny Chan handed down the sentences at the West Kowloon Magistrates Court on Wednesday morning, citing the "excessive inconvenience and suffering" the movement caused.

Retired 75-year-old Baptist minister Chu Yiu-ming - the third member of the so-called "Occupy trio" - also received a 16-month sentence, but it was suspended for two years.

The three are seen as the founders of the movement that galvanised protesters in their campaign of civil disobedience.

Tanya Chan had her sentencing delayed until June and her bail extended so she can undergo brain surgery.

What were the protests about?

The protests started in reaction to a decision made by China that it would allow direct elections in 2017, but only from a list of candidates pre-approved by Beijing.

Beijing is highly sensitive about Hong Kong's status and any calls for more autonomy from China.

The former British colony was handed back in 1997 on condition it would retain "a high degree of autonomy, except in foreign and defence affairs" for 50 years.

In 2014, the three activists' calls for non-violent civil disobedience joined with student-led protests and snowballed into the massive demonstrations.