Not possible to ‘restore’ democracy with Khaleda in jail: BNP 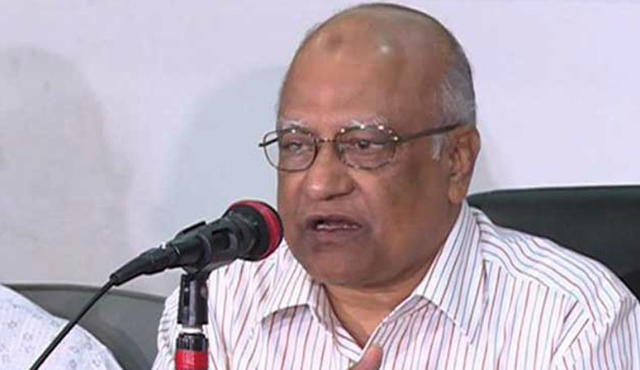 BNP senior leader Khandaker Mosharraf Hossain on Monday said it is not possible to ‘restore’ democracy in the country without freeing Khaleda Zia from jail.

Speaking at a sit-in programme, he urged BNP leaders and activists to get ready for launching a mass movement to have Khaleda released from jail.

“It’s not possible to restore democracy keeping ‘mother of democracy’ Khaleda Zia in jail. We must free Khaleda Zia first to bring back democracy and people’s rights under her leadership,” the BNP leader said.

He called upon the people of all walks of life to get united and involve in the movement to be initiated by their party soon.

Swadhinata Forum, a pro-BNP platform, arranged the programme in front of the Jatiya Press Club demanding the withdrawal of ‘false’ cases filed against BNP chairperson Khaleda Zia and its acting chairman Tarique Rahman.

Mosharraf, a BNP standing committee member, said the country is passing through a very critical time as the ruling party men have shattered the economy by indulging in widespread plundering and corruption.

He said people are now worried about their personal security the way untoward incidents are growing across the country. “Now, people don’t have the sense of security in the country. The brutal killing of our sister Nusrat in Sonagzai has exposed that no is now safe.”

To get rid of the current ‘unusual’ situation, the BNP leader said there is no alternative to restoring democracy in the country.

He alleged that the government has kept Khaleda in jail ‘unfairly’ as it fears her popularity. “She has been subjected to political vengeance for her struggle for democracy and people’s rights.”

He talked to doctors and inquired about Sayrul’s health condition. He was admitted to the hospital on Sunday after he fell sick at BNP’s Nayapaltan central office.