In close proximity to nature and history 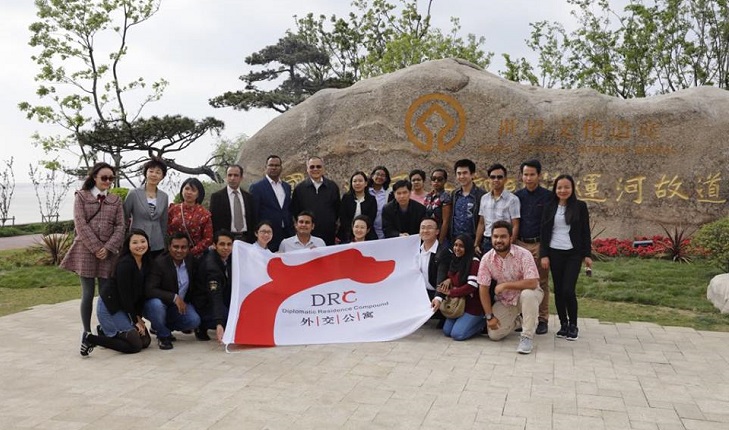 A delegation of foreign journalists of China International Press Communication Center (CIPCC) Programme 2019 and some foreign diplomats based in Beijing have recently visited Yangzhou in Jiangsu province of China.

The four-day visit was full of joy, unforgettable memories and experience for each and every member of the delegation as the brief trip took them to close proximity to nature and history of China, the birthplace of one of the ancient civilizations on the earth.

The scenic spots with traditional features of Yangzhou, a historic and cultural place better known as the first city with most canals have overwhelmed the visiting foreign journalists and diplomats during the visit.

The pleasing landscapes, teeming culture, delicious cuisines of the city have mesmerized members of the delegation and some of them were heard to term the city as a hidden gem and paradise of China.

The visit has really brought opportunities to the foreigners to behold the splendour of pastoral beauty of the second largest economy of the world and they have quenched their thirst for witnessing rural magnificence of the East Asian nation.

During the visit, they have witnessed cultural heritage and historical resources by walking along the gate and street of Dongguan which were built in the era of Ming and Qing dynasties.

The foreign visitors also went around the 486 Intangible Cultural Heritage Zone which has opened the history of Yangzhou city to them and some of them were seen buying different souvenirs for their beloved ones in the zone.

Apart from enjoying natural and historical beauty of Yangzhou, the foreign journalists and diplomats have also basked in the elegance and charm of Gaoyou, a country level city under the administration of Yangzhou.

In Gaoyou, which is located on the north side of the Yangtze River and well-known for its rich cultural heritage and historical places, the journalists and diplomats have visited the Halal Village in Lingtang Hui Township and a 700-year old mosque. It is the oldest and largest mosque of East China and enlisted as one of the world heritage sites along Maritime Silk Road of China.

They have also visited Yucheng Postal Service Station that was listed as a world heritage site in 2014. The largest and best preserved station built in 1375 has given the foreign visitors an overall idea of the ancient postal services of China as it's considered living fossil of the Chinese postal services.

The journalists and diplomats earned overwhelming experience by visiting grand canal heritage and the nearby temple. While they were visiting the around 1200-year old temple some journalists were seen climbing its seven-storied tower which is one of the significant world heritage sites of China.

During the visit, besides sightseeing and earning historical knowledge, the journalists and diplomats have also witnessed activities of some renowned Chinese companies that have long been contributing to tremendous progress of the economy of China.

In a word, thanks to the brief visit, the foreign journalists and diplomats were struck with the natural and historical nobleness of China. They were also fascinated by the warm reception and hospitality they have received from the government officials and people during the trip. As a result, the foreign guests will definitely treasure the bucolic charm of the host country in their hearts as the panoramic and idyllic scene of the cities of grand canal and lakes has left unforgettable impressions in their minds forever.