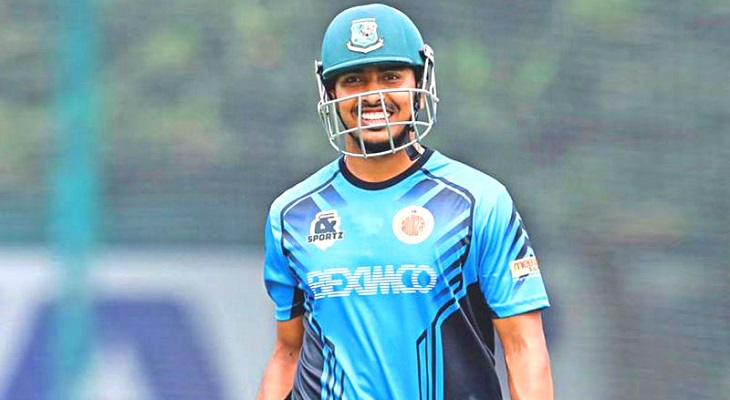 Soumya Sarkar struck a brilliant century in Savar on Sunday as Abahani Limited beat Legends of Rupganj by 102 runs in the Super League of Dhaka Premier Division Cricket League.

With this win, Abahnai recaptured the top place of the points table removing Rupganj. Both teams now have 24 points but Abahani have a better run-rate.

Abahani won the toss at BKSP and posted a mammoth 377 for seven wickets. Jahurul Islam and Soumya made 169 in the first-wicket stand. Jahurul struck 75 off 83 with six fours and two sixes while Soumya ended up on 106 off 79 with 15 fours and two sixes.

For Rupganj, Mohammad Shahid and Taskin Ahmed took two wickets each while Subashis Roy and Nabil Samad took one wicket each.

In reply, Mohammad Naim carried the bat through the innings and posted an unbeaten 123 off 135 with 13 fours and two sixes. However, Rupganj managed to score only 275 for seven wickets in 50 overs.

Along with Naim, Mohammad Shahid was the other batsman to show some batting prowess, posting 53 off 47 with four fours and four sixes.

Soumya was adjudged the man of the match.

Mohammedan won the toss and sent Prime Bank to bat first. They tumbled for 174 in 42.2 overs. Alok Kapali was their best batsman hitting 43 runs. Along with him, Nahidul Islam, Monir Hossain and Abdur Razzak posted 26, 22 and 22 respectively.

In reply, Abdul Mazid and Raqibul Hasan hit fifties to chase the target in 35 overs (175/3) losing three wickets. Sajib was the man of the match for his four-wicket haul conceding 40 runs in 10 overs.

At BKSP, Sheikh Jamal, sent to bat first, posted 243 runs before they were all out in 49.3 overs. Tanbir Hyder was the best scorer of them hitting 69 off 63 with five fours and two sixes. Besides him, Imtiaz Hossain, Rakin Ahmed and Nurul Hasan hit 33, 38 and 36 respectively.

In reply, Saif Hassan struck unbeaten 148 off 116 with 10 fours and 11 sixes to seal the game for Prime Doleshwar. Farhad Hossain was the second highest scorer for Doleshwar hitting 78 off 80 with seven fours and three sixes. They ended up on 244 for three in 38.3 overs.

Saif was the man of the match for his unbeaten century.

In the last match of the Relegation League on the same day, Brothers Union beat BKSP by six wickets relying on the century of Fazle Mahmud and stayed on the Premier League race.

BKSP batted first in the match and posted 235 runs for seven wickets. Brothers chased it successfully in 47.2 overs (241/4). Fazle Mahmud was the man of the match.